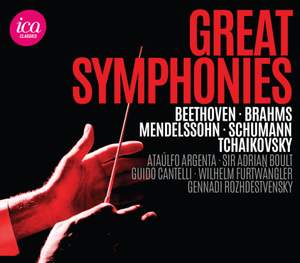 Prokofiev: The Love for Three Oranges: Suite Op. 33b

I. The Clowns (Live)

II. The Magician and the Witch Play Cards (Live)

V. The Prince and Princess (Live)

A wonderful collection of some of the best-known symphonies by Beethoven, Brahms, Mendelssohn, Schumann and Tchaikovsky together with other orchestral favourites from Debussy, Smetana, Mussorgsky and Prokofiev.

ICA Classics has brought together performances of these works by some of the greatest conductors of the 20th century – such as Wilhelm Furtwängler, Guido Cantelli, Gennady Rozhdestvensky, Sir Adrian Boult and Ataúlfo Argenta – in the very best remastered sound.

Wilhelm Furtwängler always regarded Beethoven’s ‘Choral’ Symphony as a near-religious work and his performances of it were special occasions. This release is important because it has never been issued before outside Japan. It came about because Furtwängler, having scheduled a number of performances of Beethoven’s Symphony No.9 in January 1953, fell ill during the first concert, which was subsequently abandoned. The concerts were then rescheduled for the end of May 1953, with an extra performance thrown in for those who were at the uncompleted one on May 30th.

The 1979 Tchaikovsky Symphony No.4 from the Leeds Music Festival is one of Rozhdestvensky’s most inspired performances. The Mussorgsky – the version of A Night on the Bare Mountain used in the composer’s Sorochinsky Fair – is a rarity, taken from the 1981 Proms in stereo. Prokofiev’s The Love for Three Oranges Suite from 1981 benefits from Rozhdestvensky’s legendary experience in ballet with a performance of wit and excitement.

Guido Cantelli was the protégé of Arturo Toscanini, arguably the greatest conductor of the 20th century. These very rare ‘live’ recordings from 1954 have never been released before. Reviewing the performance, the Glasgow Herald stated that Cantelli’s Schumann nearly raised the roof with its excitement but it also noted ‘the plasticity of line and transparent textures’. Debussy’s Le Martyre de Saint Sébastien was also noted for its ‘breathtaking moments’ that ‘held the audience in rapt silence’. Gramophone declared this disc to be ‘mandatory for all Cantelli fans’. Cantelli was killed in an air crash in 1956.

Ataúlfo Argenta was the foremost Spanish conductor of his generation and on the verge of a major international career before a freak accident ended his life aged 44. He was chief conductor of the Orquesta Nacional, which quickly grew into a major ensemble. Argenta also established himself in Paris and London with recordings for Decca and EMI. These exciting 1957 ‘live’ broadcasts of Beethoven’s ‘Eroica’ and Smetana’s Bartered Bride Overture are issued for the first time outside Spain. The bonus items of five zarzuela orchestral preludes by Chapí and Giménez have never been issued on CD before and reveal Argenta’s unique affinity with these Spanish composers.

Sir Adrian Boult single-handedly built the BBC Symphony Orchestra into a world-renowned ensemble that attracted such artists as Arturo Toscanini to conduct it. After retiring from the BBCSO in 1950, Boult became chief conductor of the London Philharmonic until 1957. This live 1975 Proms performance of Brahms’ Symphony No.4 has never been issued before. It has been recorded in stereo and fully captures the ‘Indian summer’ that Boult enjoyed at the Proms and in the studio with EMI at this time. The Mendelssohn Symphony No.4 was recorded live in stereo and likewise has never been issued before.