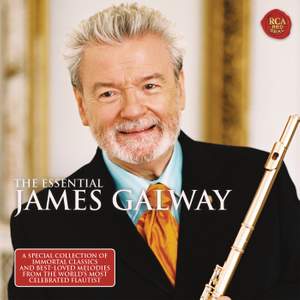 Narita: Song of the Seashore

The living legend of the flute, Sir James Galway, is widely considered the supreme interpreter of classical flute repertoire and a consummate entertainer whose appeal transcends musical boundaries. His virtuosity on the flute is equalled only by his limitless ambitions and vision. Through extensive touring, over 30 million albums sold, and frequent appearances on television shows worldwide, Sir James has garnered a fan base of millions.

Since launching his successful career as a soloist in 1975, his busy touring schedule continues to include performances with the world’s leading orchestras and most prestigious conductors. Sir James is a tireless promoter of the arts, frequently commissioning new works for the flute, publishing articles and books and sharing his wisdom and experience with young musicians through his annual ‘Galway Flute Festival’ and his ground-breaking ‘First-Flute’ programme – a series of online, interactive lessons and master-classes.