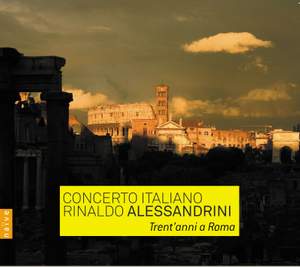 Concerto for Violin, Organ and Cello in C Major, RV 554a: I. [Allegro]

Concerto for Strings in G Minor, RV 156: I. Allegro

Concerto for Strings in A Major, RV 160: I. Allegro

Tùma: Sinfonia a 4 in B-Flat Major

Concerto in the Italian Style in F Major, BWV 971, "Italian Concerto": I. Allegro (arr. R. Alessandrini for violin and orchestra)

To celebrate the 30th anniversary of his ensemble Concerto Italiano, Rinaldo Alessandrini has chosen some of the greatest moments from their rich discography.

Over the past few years, Concerto Italiano revolutionised the criteria for performance of early music, from madrigals, those of Monteverdi in particular, to the orchestral and operatic repertory of the 18th century. Its recordings are regarded as benchmarks by critics and audiences, testifying to the renewal of interest in repertoire revisited by a Mediterranean sensibility. Among its various projects, the group is involved in the trilogy of Monteverdi operas at La Scala in Milan, which began in 2009 with 'L’Orfeo' and will end in 2016 at the Opéra Garnier in Paris. Concerto Italiano records exclusively for Naïve. In recent years it has received an impressive array of awards and distinctions from the record critics, notably four Gramophone Awards (in 1994, 1998, 2002, and 2004: the only Italian ensemble in the 1998 nominations, with three titles; and Best Recording, ‘Baroque Instrumental’, 2004). The British musical press has declared that its recordings of Vivaldi’s 'Four Seasons' and Bach’s 'Brandenburg Concertos' are currently the finest on the market.