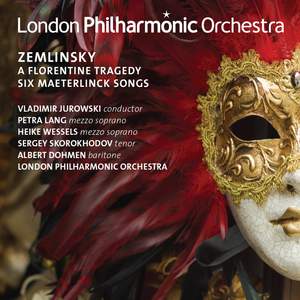 Jurowski demonstrates a masterly control of dramatic pace, ratcheting up the tension slowly but surely so that the final denouement reaches a devastating climax. The LPO proves superbly responsive... — BBC Music Magazine, October 2014, 5 out of 5 stars More…

Recording of the Week,  Vladimir Jurowski conducts music by Zemlinsky

Katherine listens to a stormy, passionate tragedy by the late Romantic composer Alexander Zemlinsky, with Vladimir Jurowski conducting the LPO.

Mezzo-soprano Petra Lang is the soloist in the rarely performed Six Maeterlinck Songs. One of the most sought-after performers in the Austro-German song repertoire, Lang captures perfectly the dark foreboding and eerie, dreamlike quality of the songs.

Zemlinsky’s one-act opera A Florentine Tragedy is based on an unfinished play by Oscar Wilde. Set in 16th-century Florence, the opera tells of jealousy, betrayal and ultimately murder, and was described as ‘a splendid work’ by Zemlinsky’s pupil and brother-in-law, Arnold Schoenberg.

Both works reference Zemlinsky’s unrequited love for Alma Schindler, who eventually chose the international star conductor Mahler as her husband. Zemlinsky never got over this, and when Alma saw A Florentine Tragedy she was furious at what she saw as the depiction of herself, Mahler and her affair with Walter Gropius.

This recording is the only currently available physical/CD pairing of these two works, both of which are rarely recorded and not readily available elsewhere.

Jurowski demonstrates a masterly control of dramatic pace, ratcheting up the tension slowly but surely so that the final denouement reaches a devastating climax. The LPO proves superbly responsive to Jurowski's demands. The opera's protagonists...vividly project the mendacious nature of the drama.

a gory tale of illicit love, portrayed in sumptuous orchestral colours, its intensity barely contained until the denouement...Jurowski’s performance makes a thrilling appeal to the imagination, abetted by visceral contributions from the three soloists.

it's a short piece whose cumulative power is extremely impressive...Jurowski and the LPO capture both its passion and its restrain well. It's a reading of remarkable orchestral clarity and lucidity...[Dohmen] remains imposing and authoritative, even if the voice is rather dry...Wessels is a gloriously voluptuous and vibrant Bianca.

Here all three roles are well taken, with Albert Dohmen surprisingly light on his feet in the heavyweight role of the unsympathetic Simone. Sergey Skorokhodov brings tonal warmth and expects, as the lithe young tenor, to survive the operatic fray, but who doesn’t. Heike Wessels has much less to do as the inscrutable woman in the middle but she does it very well. Vladimir Jurowski his conducting, succeeding in keeping the potentially excessive late-Romanticism that was Zemlinsky’s stock-in-trade within bounds, yet without diluting its genuine impact.

The performance is terrific – the LPO draw out all of the score’s terrible beauty, and Jurowski’s pacing really turns the dramatic screw. All the singers were new to me, and Heike Wessels in particular is tremendous as the sullen, frustrated Bianca...her huge dark sound glints and surges to thrilling effect.

Jurowski's belief in both [works] is never in doubt and his thoughtful yet intense conducting is matched by playing of exquisite if sinister detail from the London Philharmonic.