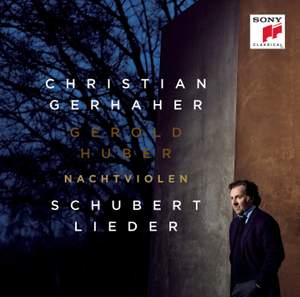 This album is a great introduction to the deeply absorbing world of Schubert's songs. It features a very personal collection of Schubert songs chosen by Christian Gerhaher, who has performed these songs for many years and has a profound connection to them. The album includes a detailed booklet text with a separate paragraph detailing each song.

Schubert set the verse of over 100 poets to music, composing approximately 650 songs. He selected biblical texts and poetry from classical Greece, the Renaissance, the Enlightenment and the early Romantic era, the poets including Goethe, Schiller, Shakespeare, Petrarca and Heine as well as his Austrian contemporaries and friends.

Christian Gerhaher's exemplary lied interpretations with Gerold Huber set standards – their recordings have repeatedly been highly acclaimed. The lied duo appears on the stages of major international recital venues, for instance at the Wigmore Hall in London, in the Carnegie Hall in New York, the Concertgebouw Amsterdam, the Cologne and Berlin Philharmonie, the Konzerthaus and the Musikverein in Vienna.

Christian Gerhaher is a regular guest at the Schwetzingen Festival, the Rheingau Music Festival, the London Proms, the Edinburgh and Lucerne Festivals, the Salzburg Festival, as well as the Aspen and Tanglewood Festivals in the USA.

After the successful world premiere of Heinz Holliger's cycle Lunea on 23 fragments by Nikolaus Lenau in spring 2013, the season 2013/2014 will see/has seen the premieres of two other new works – both dedicated to him: In the fall a new song cycle by Jörg Widmann with performances in Vienna, Frankfurt, London and Luxembourg (combined with Schumann and Fauré) as well as Goethe's Harzreise im Winter by Wolfgang Rihm – an exciting program juxtaposing settings on Goethe's texts by Wolfgang Rihm and Franz Schubert. The premiere will take place in June 2014 at the Mozart Festival Würzburg followed by concerts at the Rheingau Musik Festival and the Salzburg Festival.

With his lyric high baritone at its freest, Gerhaher has the uncommon gift of making everything alive, specific, while always sounding natural...a superlative recital by a singer who for vocal beauty, poetic insight and expressive immediacy is surely unsurpassed in Lieder today.

Gerhaher brings his special qualities, the most beautiful lyric baritone voice of any lieder specialist I know, entirely natural and immaculate German diction, and musical and expressive insights that mark him out as one of the greatest lieder singers of any age...the entire programme is vintage Schubert and vintage Gerhaher.

Beautifully judged playing from pianist Gerold Hubersupports the silky lightness of Gerhaher at his most intimate in these 24 songs; though there are flashes of steel beneath the gossamer that are all the more exciting for their sparse deployment.

gently beautiful and deeply rewarding...Gerhaher simply lets the music flow through him, his voice its unassuming servant. The pitching is immaculate, the breath control so easeful as to be imperceptible. He seems incapable of making an ugly sound.

One of the most symbiotic partnerships in chamber music...Friends since childhood, they have performed lieder since they were teenagers. This recording of works by Schubert is a marvel of the fusion of text and melody, suffused with the beauty of Mr. Gerhaher’s mellow, smooth timbre.