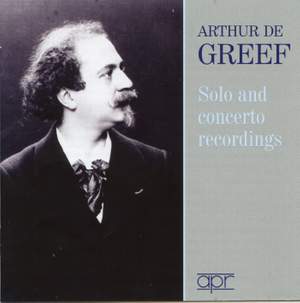 Piano Concerto in A Minor, Op. 16: I. Allegro molto moderato

Belgian pianist Arthur de Greef studied with Franz Liszt and also became a close friend of Grieg, who strongly admired his playing. He was a main-stay of the HMV catalogue in the 1920s and this set brings together for the first time his complete recordings, save for acoustic versions of concertante works he subsequently recorded electrically (the Liszt Hungarian Fantasia and abridged versions of the Saint-Saëns and Grieg concertos) and two electric chamber recordings with violinist Isolde Menges.

Given his associations, his recordings of the Liszt concertos and Hungarian Fantasy must be considered important stylistic documents, but perhaps most important of all is his recording of the Grieg concerto. He initially studied this with his teacher Brassin at the time when the latter gave the Belgian premiere of the work. He subsequently worked on it, and gave performances with, Grieg, who said of him ‘De Greef is the best interpreter of my music I have met with. It is surprising how he understands my meaning… He is a real Master’.

This is the first time that the bulk of de Greef’s recordings have been released together and they show that a serious reappraisal of a pianist from the earliest generation to record substantially, is overdue.