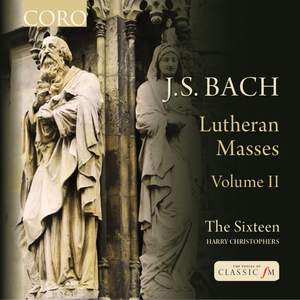 This is a fascinating lesson in the art of creative transcription by a master transcriber. Both Masses bring out the relaxed and avuncular in Christophers...With scrupulous instrumental underpinning,... — BBC Music Magazine, May 2014, 4 out of 5 stars More…

Despite their exquisite beauty, featuring splendid choruses and deeply moving arias, there are relatively few recordings of Bach’s Lutheran Masses. On this second disc, which completes The Sixteen’s mini-series, the orchestra is joined by just eight singers to perform the Masses, allowing the beauty of the virtuosic vocal lines to be heard with absolute clarity.

Sometimes called ‘Missa brevis’, the Lutheran Masses feature almost no Lutheran material at all. Musically, they are almost entirely made up of movements borrowed from Bach’s Cantatas and their beauty is in the fact that they represent the composer’s own choice of his finest Cantata movements.

It is 20 years since The Sixteen last recorded such a wealth of Bach’s music, making this a uniquely exciting project. Volume I was released in October 2013.

This is a fascinating lesson in the art of creative transcription by a master transcriber. Both Masses bring out the relaxed and avuncular in Christophers...With scrupulous instrumental underpinning, a natural recorded sound, and Doyle's ravishing 'Qui tollis', this is a worthy successor to Vol. 1.

The Sixteen could not be better suited to the genial abstraction of the sunny Mass in G major, BWV236...There are more refined and exquisite performances...but there are few as unassuming and natural as this. Strongly recommended.

There are surely few other chamber ensembles that are capable of achieving such equality of line between the vocal and the instrumental. The subtlety achieved by horn players Anneke Scott and Joseph Walters in BWV 79’s chorale ‘Nun danket alle Gott’ is particularly remarkable. All members of The Sixteen are equally at home as soloists and choral singers.