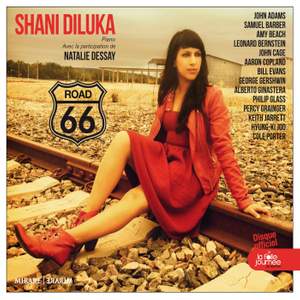 Diluka's deft elegant playing displays equal affinity with all styles and approaches. — BBC Music Magazine, May 2014, 4 out of 5 stars More…

Evans, B: Waltz for Debby

Like Jack Kerouac, when he took to the American road, on the legendary Route 66, this Mirare cd hosts a programme as a specific musical path through the United States geographically and musically, "East of my youth, west of my future" (Kerouac).

Shani Diluka has made some new discoveries: Amy Beach, composer of genius; Percy Grainger, who became American by vocation; a world premiere by Hyung-ki Joo, whose 'Chandeliers' was composed in New York after September 11; the hypnotic meditations of John Adams, John Cage and Philip Glass; the South American-influenced Bernstein, Copland and Ginastera; and the intimate link between Gershwin and jazz that inspired Bill Evans or Keith Jarrett. To conclude this journey, Natalie Dessay gives us her unique presence in a new arrangement of Cole Porter composed especially for this disc by Raphael Merlin of the Ebene Quartet.

Diluka brings appreciable nuance and delicacy to Adams's China Gates and Beach's Young Birches, and infuses the churning minimalist patterns of Glass's Etude No. 9 with more dynamic and colourist range than one often hears from so-called contemporary music specialists.

Shani Diluka is another pianist with excellent command of her chosen repertoire … the whole concept is highly convincing.