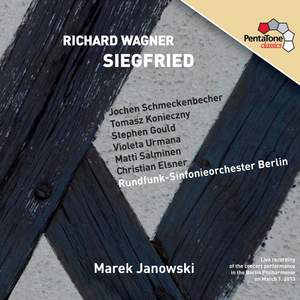 This is a lively and enjoyable performance of what Wagner called his 'heroic comedy'...listen to the short but dense Prelude and you'll hear many things that you won't have heard on any other... — BBC Music Magazine, February 2014, 3 out of 5 stars More…

This is the ninth release in PentaTone’s successful Wagner Edition and the third release of the cycle: “Der Ring des Nibelungen. The last “Ring recording” (Götterdämmerung) will follow in November 2013. The PentaTone Edition is attracting a lot of (positive) media attention.

It is becoming THE Wagner Edition of the 21st century.

This is a lively and enjoyable performance of what Wagner called his 'heroic comedy'...listen to the short but dense Prelude and you'll hear many things that you won't have heard on any other recording, combined with terrific drive...In summary, the whole here is very much more than the sum of its parts - worth acquiring.

[Gould] seems to have the stamina and the power for the role...[Elsner] sings the part with an unfailing beauty of tone and excellent use of the text...That I still believe this Siegfried must be added to any self-respecting Wagner library is mainly because of Janowski’s masterly conducting of his first-rate orchestra. There are many marvellous passages.

Stephen Gould is an heroic Siegfried in this outstanding recording conducted by Marek Janowski, with Christian Elsner a highly characterful, scheming Mime, and Tomasz Konieczny suitably world-weary as the Wanderer. The Forest Murmurs scene in Act Two is charmingly evocative...The closing duet is incandescent, assisted in no small part by the heavenly singing of Violeta Urmana as Brünnhilde.