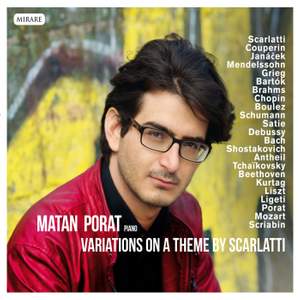 Variations on a theme by Scarlatti

Adventures in juxtaposition carry this young composer and pianist on a roller-coaster across the centuries. Porat's playing is cool-tempered, intelligent and sophisticated. — BBC Music Magazine, November 2013, 4 out of 5 stars More…

Bartók: Mikrokosmos: From the Diary of a Fly

Shostakovich: Dances of the Dolls, Op. 91b: Lyric Waltz

The rising star of a new generation of pianist-composers, Matan Porat here meets the challenge of a visionary programme built up from the basis of Scarlatti's Sonata in D minor K32. The 24 pieces that follow - from Bach to Boulez by way of Chopin and Debussy - all use the same motif, as if they were all variations on a theme. The result is a fascinating network of correspondences and interconnections that, strangely, makes us listen in an entirely new way.

Israel-born pianist and composer, Matan Porat has appeared as soloist with the Chicago Symphony Orchestra and has performed in venues such as Carnegie Hall in New York, Auditorium du Louvre in Paris, the Barbican in London and Alhambra’s Palacio Carlos V.

In the 2010-11 season Porat toured the world with Peter Brook’s new production of Mozart’s 'Magic Flute', in a version for piano solo and 7 singers. He is currently living and working in Berlin. Besides his concerts and commissions, he is also playing live music for silent movies, described by Alex Ross of the New Yorker as an “astounding feat of creative musicianship”.

Adventures in juxtaposition carry this young composer and pianist on a roller-coaster across the centuries. Porat's playing is cool-tempered, intelligent and sophisticated.

there’s an arc to this recital which makes it more satisfying than the sum of its parts. Maybe it’s the humungous intensity of the last ten minutes but when Porat plays Scarlatti’s sonata again at the very end you’ll feel a fascinating catharsis.