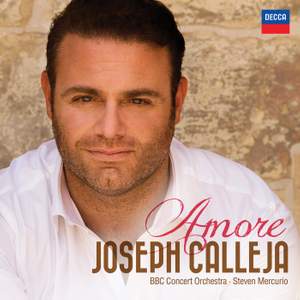 Not every track is a winner, and Calleja has yet to develop a Pavarotti-like embrace of this repertoire. But to most of these songs...the Maltese tenor brings a beguiling elegance, supported... — Financial Times, 7th September 2013, 4 out of 5 stars More…

Løvland: You Raise Me Up

Joseph sings his most popular programme yet, and one inspired by romance; a captivating programme of beautiful Italian and Mediterranean song with a contemporary twist.

The Maltese tenor evokes the golden era of Mediterranean song connecting with the great legacy of songs performed and recorded by, among others, Gigli, Schipa and the legendary Enrico Caruso.

Calleja's "Golden Voice" takes us through repertoire such as La Serenata and Barcarolle, to cinema classics by Morricone, Time To Say Goodbye / Con ti Partiro (made famous by Andrea Bocelli), and di Capua's perennial O Sole Mio to round off a captivating programme of compositions known and loved by millions worldwide.

The album features three duets with Nicola Benedetti including Mattinata, which they performed together at the UK Last Night of the Proms 2012.

Calleja's sublime artistry combined with sumptuous new orchestral arrangements enhance the beguiling attraction of Amore. This emotive, engaging album - featuring songs in six languages - is sure to speak to a massive audience, with sensational melodies and Joseph's charismatic, heartfelt singing.

Joseph plays the role of Enrico Caruso in the forthcoming major film The Immigrant starring Joaquin Phoenix and Marion Cottilard, due for release in the US November 2013 (ROW tbc)

At just 35 years of age, Joseph Calleja is one of the most sought-after young tenors on both sides of the Atlantic. Winner of Gramophone's Artist of the Year in 2012, his voice regularly inspires comparisons to "legendary singers from earlier eras: Jussi Björling, Beniamino Gigli, even Enrico Caruso" Associated Press.

"You can hear the golden Mediterranean sunshine in his voice" NPR

"a firm, even and true tenor with that heroic Italianate ingredient that draws comparisons with Pavarotti" The Guardian

Not every track is a winner, and Calleja has yet to develop a Pavarotti-like embrace of this repertoire. But to most of these songs...the Maltese tenor brings a beguiling elegance, supported by some fabulous orchestrations.