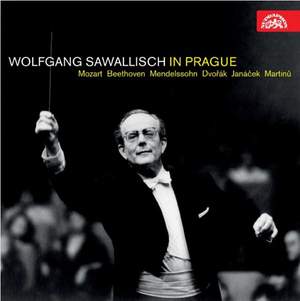 Wolfgang Sawallisch (26.8.1923–22.2.2013) debuted at the age of thirty with the Berliner Philharmoniker and four years later in Bayreuth. He led the Orchestre de la Suisse Romande for ten years and subsequently the Bavarian State Opera for over two decades (1971–92). During his tenure in Munich, Sawallisch was a frequent and extremely popular guest of the Czech Philharmonic. This compilation presents a selection of the recordings that were the fruit of the co-operation between the conductor and the orchestra. Sawallisch’s programmes in Prague repeatedly included – perhaps surprisingly – pieces by Mozart and Beethoven, as well as major works by Czech composers (Smetana, Janáček, Martinů, Kalabis, Eben, etc.). He made for Supraphon the still unequalled recordings of Dvořák’s Requiem and Stabat mater. Sawallisch’s relationship to Czech music is probably best described by the following quotation from a contemporary review: “He apprehends and interprets music by Czech composers as though he himself had been brought up in their language.” The precious Czech Radio live recordings are released by Supraphon for the very first time to mark the 90th anniversary of the late conductor’s birth.