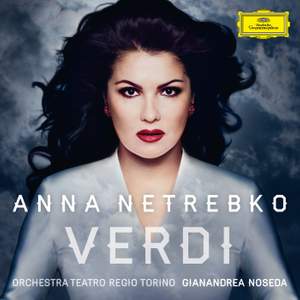 In many ways, Netrebko justifies her decision to tackle Verdi. She provides singing of sufficient amplitude and power to encompass the needs of Elisabeth de Valois...[and] is at her most expressive... — BBC Music Magazine, November 2013, 4 out of 5 stars More…

Recording of the Week,  Verdi arias from Anna Netrebko

The Russian soprano marks the composer’s bicentenary with arias and scenes from Don Carlo, Macbeth, Il trovatore, Giovanna d’Arco and I vespri siciliani in a recital which reveals a voice reaching glorious full bloom.

Already one of the most anticipated classical albums of 2013, this sumptuous, all-Verdi programme is Anna’s heartfelt birthday tribute to the master of Italian grand opera, with selections from Il Trovatore, Macbeth, I vespri siciliani, Don Carlo and Giovanna d’Arco. Music of emotion, power and extraordinary drama – personally selected and performed by the best-selling soprano of the 21st century. 2013 marks Anna’s ten years as a solo performer, and ten years with Deutsche Grammophon. It’s Netrebko’s first solo album in over five years, from the best-selling soprano of the 21st century.

Netrebko lays claim to the tragic repertoire of Italian grand opera: “Already celebrated for her glamorous face and voice, the fiery Russian-born diva has developed into a great tragic performer.” (New York Post)

A decade on from the award-winning Opera Arias, Anna reunites with specialist Verdi conductor Gianandrea Noseda to continue this extraordinary musical journey.

In many ways, Netrebko justifies her decision to tackle Verdi. She provides singing of sufficient amplitude and power to encompass the needs of Elisabeth de Valois...[and] is at her most expressive and skilled as Leonora, her tone firm and fleshy, her lines nicely shaped and her genuine trill coming in useful.

this is a very serious record by a serious singer in tip-top vocal shape...Netrebko's habitual risk-taking has not deserted her here - this set never feels like a careful assemblage of 'best' takes - and yet there's a vocal security and maturity that's not always been there before...A certain record of the year.

her voice isn’t a powerhouse, steely dramatic soprano, but it’s certainly far bigger, darker and heavier than ever before: it’s blossomed into a nigh-perfect ‘spinto’ instrument, opulent and full-bodied rather than metallic, but with plenty of bite when needed...It isn’t flawless...But with such a magnificent sound and such dramatic commitment it barely matters.

The big surprises here are the three Lady Macbeth solos...The singing is big and bold, occasionally smudgy when agility is required, but the new vocally expansive Netrebko, idiomatically supported by Noseda’s Turin forces, will undoubtedly excite her fans.

Her voice has grown in opulence of late, and you also notice greater concentration and subtlety in her declamation...her Lady Macbeth, turned on by power but falling apart under the weight of it, is chilling. Yet greater dramatic incisiveness has come at the price of agility

her soprano now offers darker colours and greater weight than it ever did before...she makes every heroine leap before us, fully alive, each widely different from the other...Along the way we also get some of Netrebko’s slippery flights of coloratura, but you can’t have everything in life.