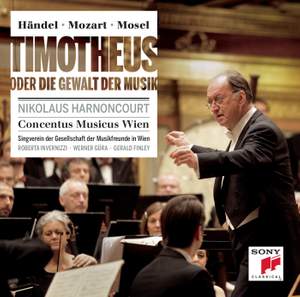 It is immediately evident from the Overture that the orchestral sound is going to be rich and ponderous, and, although Harnoncourt works wonders in varying the dynamics and getting the rhythms... — BBC Music Magazine, September 2013, 4 out of 5 stars More…

Timotheus, or The Power of Musick” is W. A. Mozart’s adaptation of G. F. Handel’s “Alexander's Feast”, which is an ode with music set to a libretto by Newburgh Hamilton.

Hamilton adapted his libretto from John Dryden's ode Alexander's Feast, or the Power of Music (1697) which had been written to celebrate Saint Cecilia's Day.

The work describes a banquet held by Alexander the Great and his mistress Thaïs in the captured Persian city of Persepolis, during which the musician Timotheus sings and plays his lyre, arousing various moods in Alexander until he is finally incited to burn the city down in revenge for his dead Greek soldiers.

The German version of Handel’s “Alexander’s Feast” was prepared by Mozart for Gottfried van Swieten in 1790.

It is immediately evident from the Overture that the orchestral sound is going to be rich and ponderous, and, although Harnoncourt works wonders in varying the dynamics and getting the rhythms to dance...the effect is more suggestive of those gigantic mid-Victorian Handel events in the Crystal Palace than anything that Mozart, let alone Handel, could have imagined.

it's a score whose eventfulness plays admirably to Harnoncourt's individual brand of theatricality...Handel loved hearing his music played with gargantuan forces...The 'authentic' movement resulted in so many anaemic, small-scale recordings that Timotheus, performed in such a way as Handel all too rarely is these days.

There is plenty else for the Singverein to get its collective teeth into, some of it in Handel's noisiest or most celebratory vein...The pick of the soloists is undoubtedly Roberta Invernizzi...Finley's celebration of Bacchus is given with a suitably military swagger.

The veteran Nikolaus Harnoncourt musters his huge forces with continual expressiveness, the choral singing is splendid, especially in the great Chaconne, and among the soloists Gerald Finley stands out for his magnificently eloquent Revenge, Timotheus cries.