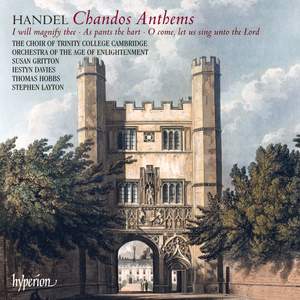 It says much for Layton's skill that he has managed to retain their companionable intimacy despite super-sizing his own resources to a choir of more than 30 singers with orchestra to match...Layton... — BBC Music Magazine, October 2013, 4 out of 5 stars More…

II. O come, let us sing unto the Lord

IV. Glory and worship are before him

V. Tell it out among the heathen that the Lord is King

VII. The Lord preserveth the souls of the saints

VIII. For look as high as the heaven is

IX. There is sprung up a light for the righteous

Handel: Chandos Anthem No. 6 'As pants the hart of cooling streams', HWV 251b

II. As pants the hart for cooling streams

III. Tears are my daily food

IV. Now when I think thereupon

V. In the voice of praise and thanksgiving

VII. Put thy trust in God

III. Ev'ry day will I give thanks unto thee

IV. One generation shall praise thy works unto another

V. The Lord preserveth all them that love him

VI. The Lord is righteous in all his ways

VII. Happy are the people that are in such a case

VIII. My mouth shall speak the praise of the Lord

Recording of the Week,  Handel Chandos Anthems from Stephen Layton and the Choir of Trinity College, Cambridge

Transparent textures and stylish but unfussy phrasing are the order of the day in these buoyant accounts of the anthems which Handel composed during his year-long musical residency at the home of James Brydges, the Paymaster General during the War of Spanish Succession.

Handel’s beautiful, intimate settings of liturgical texts written for the First Duke of Chandos are among his less well-known choral works—and are proved by this second volume from Trinity also to be among his loveliest. They are a perfect example of the composer’s English style heard in Acis & Galatea and oratorios such as Judas Maccabaeus.

The soloists on this recording include internationally acclaimed Handelians Susan Gritton and Iestyn Davies, and the young tenor Thomas Hobbs, whose warm, lyrical tone is perfect for this repertoire. Trinity College Choir Cambridge sing with their usual youthful exuberance tempered with elegance, style and precision, under the expert guidance of Stephen Layton.

It says much for Layton's skill that he has managed to retain their companionable intimacy despite super-sizing his own resources to a choir of more than 30 singers with orchestra to match...Layton is a peerless Handelian, master of the architecture, yet constantly alert to enlivening nuances that only seem obvious with hindsight.

Layton has drilled his singers to perfection in this trio of Handel's Chandos Anthems, making every word distinct and every crisp consonant a taut springboard on which to propel Handel's irresistible rhythm...Thomas Hobbs is the stand-out soloist