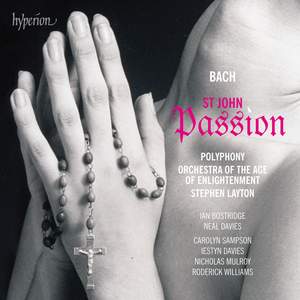 Orchestra of the Age of Enlightenment & Polyphony, Stephen Layton

this new recording's credentials border on the unassailable...Layton's pacing is compelling - there's no mistaking the gambling fever as the soldiers cast lots for Christ's garment...[Neal Davies]... — BBC Music Magazine, April 2013, 4 out of 5 stars More…

This week it's David's turn to attempt the impossible - whittling down the huge and distinguished choral discography of JS Bach and picking out the very best.

Recording of the Week,  JS Bach: St John Passion from Polyphony and Layton

The crowd-scenes crackle with terrifying energy and Ian Bostridge’s volatile Evangelist brings great narrative momentum, whilst Iestyn Davies and Richard Tunnicliffe’s eloquence in ‘Es ist vollbracht’ is worth the price of the set alone.

‘Layton has directed this annual St John Passion for several seasons now. His readings, which are becoming ever more dramatic and daring, have a raw intensity. It was easy to see why these concerts have become one of the highlights in London’s musical calendar’ (The Guardian)

Polyphony and Stephen Layton present their celebrated performance of Bach’s most dramatic masterpiece. Accompanied by the Orchestra of the Age of Enlightenment and a starry team of soloists, Layton directs a vivid account, the excitement of the narrative drama contrasting with heartbreaking moments of reflection.

In Ian Bostridge, we have the most iconic Evangelist of the last twenty years; an artist who is an incomparable communicator, a singer of technical brilliance, and an impassioned, experienced interpreter of Bach’s music.

this new recording's credentials border on the unassailable...Layton's pacing is compelling - there's no mistaking the gambling fever as the soldiers cast lots for Christ's garment...[Neal Davies] reserves a melting tenderness for the utterances from the cross. It's crowned by Iestyn Davies's sublime account of 'Es ist vollbracht'...Both Carolyn Sampson's arias are priceless.

about as state-of-the-art a Bach Passion recording as you'll hear...Take as read the urgency, clarity, balance and delamatory unanimity of the chorus...Layton's reality is about cultivating the focus of each sentiment with supreme corporate executancy...Bostridge is the master story-teller who surveys all about him.

[Bostridge is] a magnificent Evangelist though one aspect of his approach may not be to all tastes. He is highly expressive at all times and there are several occasions where some may feel he overdoes the expressiveness..Polyphony show vividly just what can be achieved in Bach singing by a fairly small professional choir, especially in terms of such things as flexibility, attack and agility...This desirable new recording deserves a place in the front rank.

it’s remarkable simply because it’s practically perfect in every way...though [Bostridge has] been singing the Passions for over a decade he still sounds as if he’s telling this familiar story for the first time...The soloists, too, are all perfectly cast...But it’s Iestyn Davies who really takes the laurels.

Layton has honed his preferred version, but only aficionados will notice or mind. Concentrate instead on the purity of sound, the emotionally expressive yet restrained performance by all and the impeccable attention to text of the soloists. Ian Bostridge (Evangelist) lives every word of the narration but never over dramatises. Countertenor Iestyn Davies's almost disembodied account of Es ist vollbracht! (It is finished!) is unforgettable.

this St John Passion brings to the fore the traits of style and taste that are distinguished hallmarks of Layton and the forces he gathers around him...Bostridge is the tenor Evangelist, eloquent, pure of tone, fluent and strong in communicating the import of the German narrative...The choir sings with a well-rounded sound, firm accents and with diction that brings the text crisply to life

when Bach’s goal is mellifluous comfort, as in the final chorus, Ruht wohl, Polyphony wins hands down.