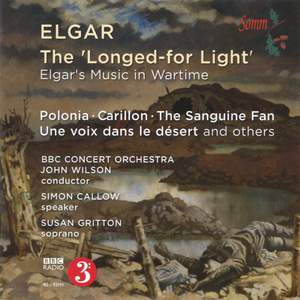 Recording of the Week,  Elgar and the First World War

Sir Andrew Davis presides over a touching account of the incidental music for The Starlight Express, whilst John Wilson champions wartime rarities including Polonia, Carillon, and Le drapeau belge*; Simon Callow narrates with gusto on both recordings.

The outbreak of the Great War caused Elgar much anguish and depression and the music composed during these years reflects his sorrow and deep patriotism.

Apart from Elgar’s early Sursum Corda Op. 11 (composed in 1894), this disc takes us on a musical journey from shortly before the war began to the composer’s last wartime orchestral work, The Sanguine Fan, a shaft of light during the darkest days of the war in 1917. The music on this disc, although not premiere recordings (they were originally recorded by the HMV label), this is the first modern recording not only of these works but also to provide a unique survey of Elgar’s compositions of this time.

Performed by the BBC Concert Orchestra and conducted by John Wilson, this CD also includes Susan Gritton and the renowned actor Simon Callow who is the speaker on Le Drapeau Belge Op 79.

Here's a supremely enjoyable Elgar survey centred around a clutch of works composed during the Great War...Throughout, the BBC Concerto Orchestra respond with bright-eyed conviction and commendable polish for John Wilson, whose endearingly communicative, shapely and affectionate readings...hold their own...Elgarians shoudl ceratinly lend an ear to this entreprising and rewarding Somm anthology

This is a rewarding disc, giving us opportunities to hear some Elgar scores that rarely see the light of day. John Wilson is in evident sympathy with the music and secures consistently fine playing from the BBC Concert Orchestra...The texts are included - though you won’t need them to follow Simon Callow’s speech, so clear is his diction

none of these pieces offers first-rate poetry, but Callow’s performance is so commanding that one hardly notices, and he clearly relishes moments such as the opening “Sing, Belgians, Sing!” of Carillon...With excellent performances all-round, the disc is a great place to start if you’re looking to explore the lesser-known works of Elgar.

Un Voix dans le désert, Carillon and Le Drapeau Belge are melodramas to wartime verse by the Belgian Emile Cammaerts, vigorously proclaimed by Callow, with a taut solo from Gritton halfway through the first. More interesting agitprop is the purely orchestral Polonia