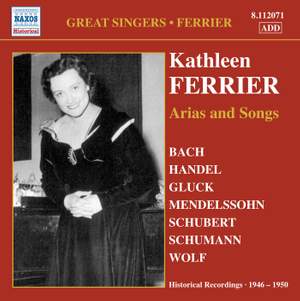 Part I: Arioso: Woe unto them who forsake him!

Handel: Atalanta, HWV 35, Act I: Aria: Like as the love-lorn turtle (Come allat tortorella langue) (arr. for voice and piano)

Kathleen Ferrier was one of the greatest British singers of the 20th century. For ten years she enjoyed an unparallelled career, admired equally for the generous warmth and sincerity of her interpretations as for her uniquely splendid contralto voice. This reissue features twelve arias and songs that Ferrier recorded for Decca between 1946 and 1950. In addition there are eight treasurable items from a 1949 Norwegian Radio recital in Oslo, which include her only published recordings of Hugo Wolf.