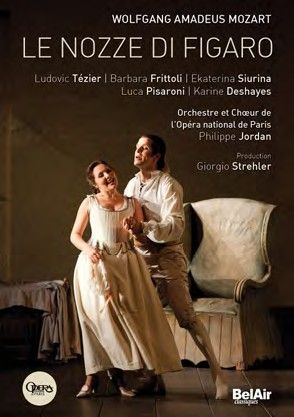 The legendary production by Giorgio Strehler filmed at the Paris Opera with a cast that unites the finest Mozartians of our time.

A revival of Strehler's 'Marriage of Figaro' is always an event. In 2010, 37 years after its creation, it rose again in triumph at the Opera Bastille with a new generation of performers: Ludovic Tézier (Count Almaviva), Barbara Frittoli (Countess), Ekaterina Siurina (Susanna), Luca Pisaroni (Figaro) and Karine Deshayes (Cherubino).

Conductor, Philippe Jordan directs the Orchestra and Chorus of the Paris Opera.

Also in this bonus edition, there is an interview with Humbert Camerlo who has worked extensively with Giorgio Strehler and achieved this staging for the revival, which continues from September 15 to October 25, 2012 at the Opera Bastille for 14 special performances.

This Franco-Italian-Russian-Irish-English combo plays well together … this cast sings well too...Jordan's conducting sound large-scale and Romantic to our period ears...this new set plays as a comfortable, conventional theatrical experience with much art onstage from cast and scenery.

Unlike many Figaro productions these days, the physicality is never vulgar, and there are constant small touches that add character...[Pisaroni] displays the ideal bass-baritone instrument for this role, and his person is just as alive to every nuance as his singing...[Siurina] is marvellous when angry...no one on DVD has brought greater tonal shine and firmer technique to Susanna's music...[Frittoli] offers an absolutely complete characterization.