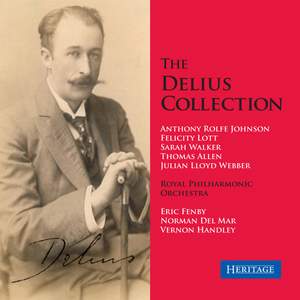 The present set, sumptuous in quantity and quality, is quite a coup for Heritage. The price is right and the content is classic...Classic Delius overwhelmingly in fruity early digital sound. — MusicWeb International, August 2012

Delius: The Walk to the Paradise Garden

A song of the setting sun

By the sad waters of separation

See how the trees

I was not sorrowful

They are not long, the weeping and the laughter

Delius: Idyll 'Once I passed through a populous city'

In the Garden of the Seraglio

So white, so soft, so sweet is she

How sweet the silent backward tracings

I stand on some mighty eagle's back

Now finale to the shore

To mark the 150th Anniversary of the birth of Delius, Heritage is thrilled to announce the re-release of ‘The Delius Collection’, a 7 CD slim-line wallet box of benchmark Delius recordings which originally appeared on the Unicorn Kanchana label. At the heart of this set are the recordings made by Eric Fenby and the RPO – interpretations of those works that Fenby took down or edited whilst working with the composer in the capacity of amanuensis. Further recordings from the Delius oeuvre are conducted by two luminaries of English music, Norman Del Mar and Vernon Handley with contributions from Anthony Rolfe Johnson, Sarah Walker, Felicity Lott, Thomas Allen, Julian Lloyd Webber and Ralph Holmes amongst others. Extensive liner notes are provided by Robert Matthew Walker as well as a ‘Foreword’ by Delius and Fenby authority, Stephen Lloyd. Full texts are included in the commemorative 28 page booklet.

The present set, sumptuous in quantity and quality, is quite a coup for Heritage. The price is right and the content is classic...Classic Delius overwhelmingly in fruity early digital sound.