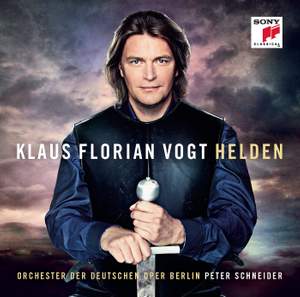 Vogt has an attractive if slender voice, and for him to sing on this album called Heroes seems a bit odd, since he is more suited to tender regrets than to thrilling outbursts of tone. He shows... — BBC Music Magazine, July 2012, 3 out of 5 stars More…

Ach so fromm, ach so traut

Klaus Florian Vogt is Bayreuth´s leading tenor – he has a unique voice, perfect technique and last but not least the perfect look for a leading man in the works of Wagner.

He had a triumphant breakthrough success as "Lohengrin" at the world famous Bayreuth Wagner festival in the Summer of 2011. Major media acclaimed his singing as "the third wonder of Bayreuth" and the "...best Lohengrin ever".

Klaus Florian Vogt sings in all major opera houses of the world. In 2012, he will star in new productions in Tokyo (Lohengrin), Munich (Valkyrie) and Barcelona (Florentine Tragedy). He will also feature in roles at Bayreuth.

Helden ("Heroes") is Vogt´s first album for Sony Classical, where he is exclusively signed, and is his first recital recording. The CD shows major pieces linked with him, of course Wagner and the famous "Grahlserzählung" in Lohengrin, but there are also beautiful arias by Weber, Flotow, Korngold and Lortzing – and last not least also by Mozart.

Vogt has an attractive if slender voice, and for him to sing on this album called Heroes seems a bit odd, since he is more suited to tender regrets than to thrilling outbursts of tone. He shows a Lieder singer's sensitivity to words, and is almost ideally suited to Lohengrin's narration, perhaps the high-point of his recital.

[Vogt] offers the gentlest presentation of [Siegmund's] music that I've heard, and notably touching it is. He impresses even more with Lohengrin's narrative, where stage experience pays dividends...Vogt phrases exquisitely, and though the gentleness of sound is again evident, the strength of the character's convictions throughout is clear.

Despite the title, Vogt sounds nothing like a typical Heldentenor... His sound is far slimmer, lighter and brighter than one usually hears in heroic repertoire, but has a real metallic core and a thrilling ‘blade’ in the upper register... There’s no bellowing or bluster...his plangent, youthful timbre make him an exceptionally vulnerable Siegmund, a shy but quietly-confident Walther and one of the most truly ethereal Lohengrins you’re likely to hear.

his Siegmund, naive and ecstatic rather than virile and forceful, is striking. Vogt's vocal ease and cleanness of line is appealing in Weber and Wagner, and he proves an accomplished, elegant Mozartian.