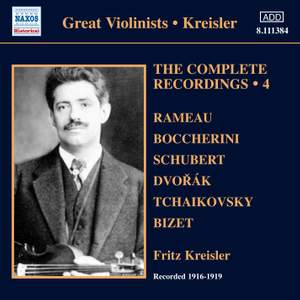 Excerpt,  Smetana: From the Homeland - two duos for violin and piano

Z domoviny (From the Homeland): No. 2. Andantino, "Bohemian Fantasie"

Spencer, H: Underneath the Stars (arr. J.A. Pasternack for violin and orchestra)

Robert A. King: Beautiful Ohio (arr. for violin and orchestra)

The 1916-19 period saw Fritz Kreisler at his peak as an artist, although the shadow cast by America’s entrance to World War one in 1917 forced him to cancel numerous concerts. The improved fidelity possible by 1916 saw Kreisler making substitutes of his earlier American recordings, including his own Liebesfreud.

Amongst an abundance of technical marvels, Kreisler’s superb ‘parlando’ bowing is demonstrated in Granados’s Spanish Dance. The string quartet recordings include a fine Andante cantabile by Tchaikovsky, and persuasive performances with small orchestra in 1917 include Beautiful Ohio which would later be adopted as the state’s official song. After the Armistice, Kreisler was able to return to the studio in 1919 for showcase works such as Valdez’s Sérénade du Tzigane.

This ongoing series of the complete Fritz Kreisler recordings generates new interest with each release. Our highest standards of audio restoration and remastering make these volumes the reference for these historic recordings, with comments such as ‘the results are incredible’ (ClassicsToday.com on Vol 3, 8110922) encouraging seasoned collectors and inquisitive newcomers alike.