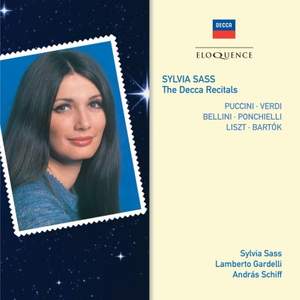 Entering into every nuance of the songs’ moods, and employing a dynamic range from the merest whisper to a full-blooded climax, Sylvia Sass makes the utmost of their not very rewarding vocal... — Gramophone Magazine More…

Sylvia Sass was born near Budapest, Hungary, in 1951 to a very musical family. Her mother was a coloratura soprano and her father a high school music teacher. She made her stage debut at age 14 in Adam’s operetta Die Nürnberger Puppe and then commenced study at the celebrated Franz Liszt Academy in Budapest, completing a five-year program in two. Her professional debut was as Frasquita in Carmen in 1971. Several awards followed – 1st prize at the Kodály Voice Competition in Budapest, 1972; winner at the International Opera Competition for Young Singers, of the Grand Prix as Violetta in La traviata, 1973, the Silver Medal at the International Tchaikovsky Competition in Moscow, 1974. She was also made an Honoured Artist of Hungary in 1977.

While still in Budapest, she performed such dramatic roles as Freia in Das Rheingold, Violetta in La traviata and Mimi in La bohème. International stardom came with a composer with whom she is most associated and in a role represented on her Decca recitals – Giselda in Verdi’s I Lombardi at Covent Garden in London, 1976. The next year she made both, her Italian debut in Turin as Lady Macbeth, and her Metropolitan Opera debut as Tosca alongside José Carreras. La Scala followed the year after, in 1978, where she sang Puccini’s tragic heroine Manon Lescaut alongside Plácido Domingo.

Soon, Sass was being heralded as ‘the new Callas’, and she did meet Callas in person, thanks to a meeting set up by Leonard Bernstein. True, the voice had a similar dramatic colour, but Sass quickly rebuffed the comparison, saying, ‘Callas was so great and so unique. I just don’t think it’s fair to compare somebody with such a great artist.’

Her three recital records for Decca include two discs of operatic arias, including all her most celebrated roles, both conducted by Lamberto Gardelli, and a disc of songs by Liszt and Bartók with her compatriot, pianist András Schiff. All of these are issued collectively as a 2CD set for the first time. In recent years, Sass has settled in France, where she keeps busy painting and giving masterclasses.

Entering into every nuance of the songs’ moods, and employing a dynamic range from the merest whisper to a full-blooded climax, Sylvia Sass makes the utmost of their not very rewarding vocal line; but the success of this performance is assured by the subtle playing of András Schiff, who conjures up beautiful sounds from the swirling figurations [Bartók] … Die Loreley is an evocative scena, sung imaginatively (and with much flexibility of pace) by Sass, bringing into play a vocal quality as seductive as that of the siren herself; and her gentle singing of the serenade Kling leise, mein Lied would melt the most obdurate heart. … all the performances here are unusually illuminating and satisfying; and the recording is excellent.