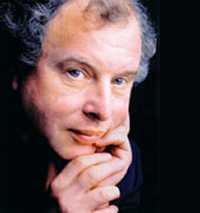 András Schiff is a Hungarian classical pianist. Born December 21 1953 in Budapest, he began piano lessons at the age of 5 with Elisabeth Vadasz. Schiff studied at the Franz Liszt Academy of Music in Budapest, and later in London with George Malcolm. He emigrated from Hungary in 1979[1].

In 1999 he formed his own chamber orchestra, the "Cappella Andrea Barca" (the name being "Andras Schiff" in Italian). He has since appeared as a conductor with many major orchestras.

Schiff is one of the best-known living interpreters of J.S. Bach and Robert Schumann. He has recently begun to perform in recital and to record the complete piano sonatas of Beethoven.

The Hungarian-born pianist is joined by the Orchestra of the Age of Enlightenment for a recording of Brahms's two piano concertos that strips away performance traditions to present refreshingly original accounts of both works, full of detail and character.