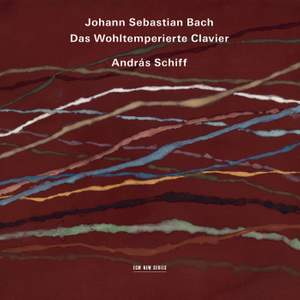 more like an than a rejection of his youthful preoccupations...Schiff's Bach sings and dances, and has a clarity derived from a mesmerising touch and an aversion to the sustain pedal. The crucial... — BBC Music Magazine, December 2012, 4 out of 5 stars More…

Recording of the Week,  Wispelwey and Schiff re-visit Bach

For his third recording of the Suites, the Dutch cellist tunes his instrument down by a whole tone to the pitch which was commonly used in Cöthen where Bach composed the works, whilst Schiff’s second take on The Well-Tempered Clavier is more direct and less sentimental than its predecessor.

As a young pianist, András Schiff earned wide esteem for his 1980s recordings of the major keyboard works of J.S. Bach; in recent years, as part of his long term relationship with ECM, he has gone back to Bach as a sage veteran, earning more acclaim for his New Series recordings of the Goldberg Variations (2003) and the six Partitas (2009). Now, using his own Steinway, Schiff turns his focus to the 48 preludes and fugues of The Well-Tempered Clavier, making studio recordings in Lugano of both books for this 4-CD set.

An iconic inspiration for composers from Mozart and Beethoven to Chopin and Brahms and beyond, The Well-Tempered Clavier has long been considered the Old Testament of the keyboard literature (with Beethoven’s piano sonatas as the New Testament). In his liner notes, Paul Griffiths underscores the suitability of Bach’s timeless keyboard work for the modern piano: “Bach’s inquiry into so many nuances, of touch, of interplay between hands and between contrapuntal lines, of character and of expressivity, has helped form keyboard technique as we know it, and his music belongs to the instrument of Beethoven, of Chopin, of Debussy, of Kurtág - especially when that instrument is played with the mastery and sensitivity of Schiff in these performances (...) Noteworthy is his floated melody and his rhythmic sense - his realization that so much of Bach’s music is song or dance. Grandeur and intimacy are also here. Wit, too.” In the introduction to his ECM release of Bach’s Partitas, Schiff laid out his motivation for revisiting music he first recorded two decades before: “Great music is far greater than its performers. We try our entire lives to unveil its secrets and to convey its unique message. Even if we never quite reach the imaginary goal, our many performances give us experience and knowledge that were hidden from us years ago. We form a better understanding of its structure and inner workings. Horizons broaden before our eyes.”

more like an than a rejection of his youthful preoccupations...Schiff's Bach sings and dances, and has a clarity derived from a mesmerising touch and an aversion to the sustain pedal. The crucial organic relationship he establishes between prelude and fugue, meanwhile, remains unimpeachable...Schiff's new set doesn't replace the old; it complements it.

Schiff’s approach is informed by a judicious range of expression.

His new Well-Tempered Clavier reveals many instances of interpretative refinements and rethinking...To be sure, Schiff does not always surpass his younger self. The Book 2 B flat major Prelude's newly calibrated linear profile misses the earlier traversal's suppleness and humour...Reservations aside, Schiff remains a stimulating Bach pianist who happily refuses to rest on his discographical laurels.

He presents each prelude and fugue as a carefully polished gem. Not using the sustaining pedal helps give the impression of separation between notes - as one hears more on a harpsichord. This serves to bring out the rhythms of the pieces. His ornamentation is subtle and limited, but one gets the feeling that it is just right...a fine recording of Bach’s great preludes and fugues - one that even those hesitant to listen to the work on a modern piano should seek out.

Using virtually no sustaining pedal, Schiff brings great rhythmic and melodic clarity that reveals much of the wonders of this music. Less sentimental than his earlier recording there is a directness and intelligence which combined with careful tempo considerations between preludes and fugues sound on the whole somehow ‘right’.

he makes sparing use of the sustain pedal, advocating its use “intelligently and discreetly”, and comparing the effect to a string player’s use of vibrato...Schiff looks backwards to the more emotional Bach of old-school pianists, while acknowledging the stylistic input of harpsichordists, but his playing has joy and brilliance, as well as depth

the clean, limpid textures of these performances are one of their most striking characteristics. Another is the sense of rightness about almost every tempo that Schiff adopts; nothing seems hurried or laboured...the playing is so immaculate and projects such authority that it seems churlish to want it step out of its carefully thought-out character.

Schiff admits he now dislikes the sentimentality of some of his earlier Bach recordings; and this one is certainly clear of such emotional indulgences...the result is a supremely classical rendition of one of classical music's keynote works, blessed with an almost transparent clarity.

Schiff plays with hands alone, avoiding sounds that linger and fade for the delights of the sober, the centred, and clean. Impersonal playing? Not at all.
But the personality on display is Bach’s rather than Schiff’s. And full pleasure comes with close concentration as Schiff, without frills or deviation, leads us straight to the music’s heart.

Playing with crystalline clarity and a rhythmic buoyancy that highlights the works’ dance elements, Mr. Schiff reveals the contrapuntal brilliance and the joy, wit and melancholy of these 24 preludes and fugues.