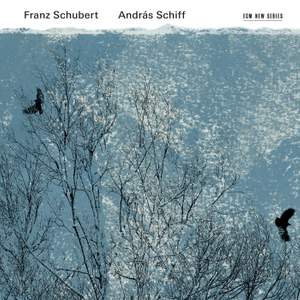 Sir András Schiff’s reputation as one of the great interpreters of the work of Franz Schubert is long-established and he has always maintained that Schubert’s music is amongst the most moving ever written. Schiff underlined the point on his ECM New Series album with the C Major fantasies at the end of the 1990s, and he does so again on this remarkable recording. Two Schubert Sonatas (D894 & D960), the six Moments musicaux, Four Impromptus (D 935), the ‘Hungarian Melody’ and an Allegretto are addressed on a period instrument, the fortepiano. The pianist says: “My fortepiano was built by Franz Brodmann in Vienna in 1820. It is to me ideally suited to Schubert’s keyboard works. There is something quintessentially Viennese in its timbre, its tender mellowness, its melancholic cantabilità...It is in the quiet and quietest moments when Schubert - like nobody else - touches our hearts.”

Elsewhere in an absorbing booklet essay, Schiff notes: “Finding the right venue is essential. The room must not be too large, its acoustics, proportions, resonances and atmosphere should be ideally attuned to the needs of the fortepiano. Such a hall is the Kemmermusiksaal H.J. Abs of the Beethoven-Haus in Bonn.” It was there that these memorable recordings were made in July 2014.

[Schiff] shows how [the fortepiano's] muted, delicate sound can transform Schubert for modern listeners. Two of the piano sonatas, the G Major, D894, and the late B Flat, D960, speak to us as if in an intimate tête-à-tête. The Moments musicaux, D 780, and the Four Impromptus, D 935, smile with informal grace.

Schiff’s Schubert is a known quantity: his comprehensive Decca set of the keyboard works remains a classic, but the sounds here are unexpected...Schiff, a self-confessed period-instrument convert, returns to the great G and B major sonatas, the second set of Impromptus and Moments Musicaux, making them sound hot off the press, fresh and new.

Schiff conjures wisp-like sonorities and never makes an ugly sound, and the Moments musicaux crackle with incisive effects. The smaller pieces work best, while the sonatas are quite difficult to sustain.

[The 1820 Brodmann instrument] sounds glorious: its tone and action seem ideally to suit these works…let us hope there is more to come.

Many years after recording all the composer’s sonatas, Andras Schiff rethinks, on an historical Brodmann fortepiano, his approach to Schubert, underlining the intimate, almost confidential side of his music. Irony, sadness, intensity and gravity: the many facets of Schubert piano music are to be found in one of the most personal and valuable contributions to the recent discography.