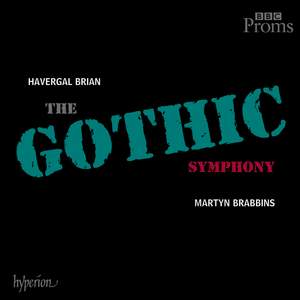 the best [recording] yet. There's an ongoing buzz of Proms atmosphere that grips from start to finish; and the recorded sound succeeds phenomenally at somehow fitting Brian's hugest climaxes... — BBC Music Magazine, March 2012, 4 out of 5 stars More…

Hyperion release a live recording of the British composer’s gargantuan first symphony, captured at a rare performance at the BBC Proms this summer and featuring an orchestra of over 200 and a choir of 600!

On 17 July 2011 over 800 performers gathered in London’s Royal Albert Hall to give a rare performance of Havergal Brian’s Symphony No 1 in D minor—‘The Gothic’. Tickets for this Prom sold out within 24 hours, and so it gives us great pleasure to make this live recording available to all.

It’s a pretty phenomenal work. Responding to the challenge set by Sir Henry Wood, the composer has thrown just about every known orchestral instrument into the mix, then adding a double chorus of over 500, plus children’s choirs, for an hour-long Te Deum—the church’s blazing Hymn of Thanksgiving—which makes up the symphony’s finale.

Whether or not you were lucky enough to be there on the night, this is a recording not to be missed.

the best [recording] yet. There's an ongoing buzz of Proms atmosphere that grips from start to finish; and the recorded sound succeeds phenomenally at somehow fitting Brian's hugest climaxes alongside the delicate scoring of other passages into a convincing perspective. Under Brabbins's forthright direction, even the work's poorer passages (and whatever Brian's fanatical supporters say, there are plenty) don't sprawl.

Hyperion's release is a perfect one, of a great event, a magisterial work and an encapsulation of the enormous difficulties of the project as a whole...[Brabbins emphasises] the kaleidoscopic variety of speeds, textures and invention in the score. Aided by Hyperion's sensational sound, details which barely registered before become crystal clear...I cannot recommend it strongly enough.

credit to Martyn Brabbins for overseeing a performance which emphatically does not play it safe: enabling the piece to be appreciated for a formal evolution as oblique and purposeful as is its emotional progression...the discreet but intent control exerted over the vast numbers leaves no doubt as to his conviction. That the capacity audience betrays so few sign of its presence says much in itself.

This seems likely to become the top recommendation of this huge but strange symphony for many years to come...The BBC Proms is one of the few organisations which is capable of putting on a performance of this epic work, and I was thrilled to learn that Hyperion would be releasing it. It is well worth hearing.

As ideas tumble forth in Havergal Brian’s epic scheme, you cannot help admiring his fervour in getting it all down on paper. It remains one of the oddities of the English symphonic repertoire, but Martyn Brabbins and his legions of players and singers do it proud.

Where to begin? This is a hugely impressive record of a great performance, but I’m not convinced that this is great music. But you can’t help feeling thankful that once in a generation we’re given the chance to hear something of this magnitude and judge the results for ourselves