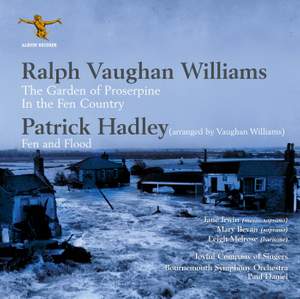 Performances are authoritative, atmospheric, and not at all self-conscious when dealing with rollicking monks or comedy Dutchmen. — BBC Music Magazine, September 2011, 4 out of 5 stars More…

Vaughan Williams: The Garden of Prosperine

Part I: The Fens

Part I: The Monks of Ely

Part I: The Dissolution

Part I: The Dutch

Part I: The Powte's Complaint

Part I: The Glory of the Commonwealth

Part I: The Puritans

trad.: Folksongs from the Eastern Counties

Folksongs from the Eastern Counties: The Captain's Apprentice

Recording of the Week,  Vaughan Williams’s The Garden of Proserpine

Paul Daniel and the Bournemouth Symphony Orchestra make a splendid case for Vaughan Williams’s early setting of poetry by Algernon Charles Swinburne for solo soprano, chorus and orchestra, coupled with In the Fen Country.

Vaughan Williams completed The Garden of Proserpine in 1899 and the work was begun in 1897 or 1898. For the twenty-something composer, it was a first attempt at a large-scale work, 489 bars long (at 24 minutes) for soprano soloist, chorus and full orchestra. Given that Vaughan Williams had only produced a handful of songs and some chamber pieces by this date, it is an impressive achievement that, in the closing pages, achieves that combination of radiance and nobility that is so characteristic of this composer in his later works. This is a premier recording.

In the Fen Country was completed in 1904 and first performed in 1909 by Thomas Beecham, the melodic outlines and the spirit of folk music is prevalent in this work.

Hadley’s Fen and Flood was inspired by the devastating events of the night of January 31 1953 when a deadly hurricane force wind created a storm tide up to 18 feet above mean sea level. Overall 2,400 people both here and in The Netherlands lost their lives. Vaughan Williams persuaded his friend Hadley to allow him to arrange the work for SATB. The new arrangement was first performed in 1956 and was dedicated to Vaughan Williams. This is a world premier recording.

The recording was recorded at The Lighthouse Poole with the Bournemouth Symphony Orchestra, conducted by Paul Daniel with soloists Jane Irwin, Mary Bevan, Leigh Melrose and the Joyful Company of Singers under Peter Broadbent.

Performances are authoritative, atmospheric, and not at all self-conscious when dealing with rollicking monks or comedy Dutchmen.

Paul Daniel obtains exemplary results from his combined forces and the sound is outstandingly realistic to match...[Fen and Flood proves] a hugely likeable discovery...compact, dramatic, tuneful and sincere - and delivered with splendid dash and obvious affection here...Don't miss this fascinating release.

Here's something to fascinate any lover of British music...Jane Irwin is radiant in the solos and the Joyful Company of Singers is an excellent, well-balanced choir..Daniel has often demonstrated great warmth and understanding in his performances of British music and he's the ideal conductor of all the works here.

[Fen and Flood is] a history of East Anglia and its relationship with the sea, told through a mixture of local folk songs and poems, which as Paul Daniel's wonderfully paced performance reveals, builds into something unexpectedly powerful.