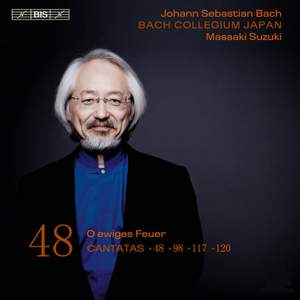 striking testimony to fine SACD engineering as well as the performers: this clarity and springiness is a vital component...the opening of BWV120, a tight-rope of alto demi-semi-quavers on which... — BBC Music Magazine, July 2011, 5 out of 5 stars More…

Gott, man lobet dich in der Stille (BWV 120) was composed for a festive church service marking the annual town council election in Leipzig. But the programme also also offers moments of introspection and quiet beauty, such as the celebrated alto aria Ich will dich all mein Leben lang from Cantata 117, here performed by the counter-tenor Robin Blaze, well-known to the followers of this series.

With approximately another eight volumes remaining of this great undertaking, the energy and dedication of Masaaki Suzuki and his musicians show no signs of flagging, and the recent volumes 46 and 47 were warmly welcomed by reviewers around the world, receiving distinctions such as ‘Critics’ Choice’ in Gramophone and ‘Choral Choice of the Month’ in BBC Music Magazine.

striking testimony to fine SACD engineering as well as the performers: this clarity and springiness is a vital component...the opening of BWV120, a tight-rope of alto demi-semi-quavers on which Blaze balances with remarkable security and poise [is] quite the best I've heard on disc...This is without question an outstanding contribution to Suzuki's complete cantata project

Robin Blaze is at his most ringing, mellifluous and assuaging here...Suzuki's strength lies in summoning up a world from the text and a sense of believing it...["Heil und Segen"] is sung exquisitely by Hana Blazikova and caps another consistently fine performance in the late autumn of Suzuki's steadily impressive marathon.

[this disc] demonstrates the ever-rising standard, by now quite stratospheric, of Suzuki and his choir and orchestra in this massive recording project.