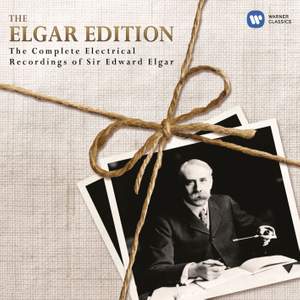 This 9-disc set gathers all of the recordings of Elgar himself conducting (mainly with the LSO), including the Violin Concerto with Yehudi Menuhin. — James Longstaffe, Presto Music, May 2014 More…

Elgar: Rehearsal for second take of III. Rondo (Presto) from Symphony No. 2 in E flat Op. 63

Go in the name of Angels and Archangels (cue 72)

Praise to the Holiest (cue 60)

And now the threshold (four before cue 73)

Jesu! by that shuddering dread (cue 106)

Jesu! by that shuddering dread (cue 106)

Elgar: Verse 1: We are the music makers

Elgar: Verse 4: A breath of our inspiration

Elgar: Verse 8: For we afar with the dawning

Elgar: Land of Hope and Glory

Elgar: The Banner of St George: It comes from the misty ages

I. The Dance (Sonnenbichl) (Allegretto giocoso)

V. March of the Mogul Emperors

Edward Elgar was the first composer to make extensive recordings of his own compositions. HMV (His Master's Voice) recorded much of his music acoustically from 1914 onwards and then began a series of electrical recordings in 1926 that continued until 1933, including his "Enigma Variations," "Falstaff," the first and second symphonies, his cello and violin concertos, all of the "Pomp and Circumstance" marches, and other orchestral works. Part of a 1927 rehearsal of the second symphony with the London Symphony Orchestra was also recorded and later issued.

This 9-disc set gathers all of the recordings of Elgar himself conducting (mainly with the LSO), including the Violin Concerto with Yehudi Menuhin.

With Colin Davis, Mark Elder, Andrew Davis and others promoting it, Elgar’s music is in good hands. Yet perhaps nobody has known so well as the composer himself how it should go — how passionately, how freely — as this collection of the complete electrical recordings he made between 1926 and 1933 magnificently shows...Elgarians owe EMI so much.

It’s surprising how few allowances need to be made for the scratchy mono sound. Elgar was a skilled conductor of his own work, and what’s refreshing is how swift and urgent an interpreter he was...The two symphonies have rarely sounded less parochial and more like fin de siècle European classics...This set is a revelatory bargain - once you start dipping in you can't stop.