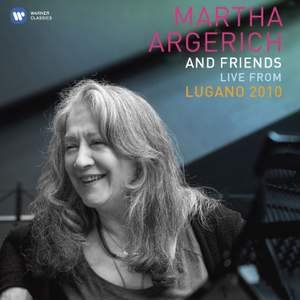 the sustained quality of music-making on display here ensures that the collective result is something much more than a high-powered musical love-in...her approach [to the Chopin] is as fresh... — BBC Music Magazine, June 2011, 4 out of 5 stars More…

Brahms: Variations on a theme by Schumann for four hands, Op. 23

The Firebird Suite: Dance and variations

The Firebird Suite: The Princesesses' Dance

EMI Classics is pleased to release the latest instalment of highlights from the Martha Argerich Project at the Lugano Festival. This is the eight annual 3-CD set celebrating the musical fruits of a project in which young artists join seasoned performers, including Ms. Argerich, to explore wide-ranging chamber music and orchestral repertoire, both well known and rarely heard. The CDs, recorded in the summer of 2010, are being released in anticipation of the Festival’s 2011 season in June.

As a chamber music event, this series has become a laboratory that gives guest artists a chance to prove themselves not only in well-known masterpieces but also in rarely performed repertoire.

This is Martha Argerich’s 70th birthday year, and this year, the Live from Lugano series will be redesigned, starting with this edition. The new cover concept will be incorporated into future Lugano releases and the previous editions will be scheduled for redesign as necessary. The new design reflects the vibrancy of both Argerich and the festival.

The piano stands at the centre of the programming, not only with works originally written for it but also with transcriptions, which played an important historic role in the diffusion of music in remote areas and within family circles.

The repertoire features includes: Schumann’s Sonata No. 1 for Violin and Piano in A minor, op. 105 and Adagio and Allegro for Cello and Piano, Op. 70, Chopin’s Rondo in C Major, Op. 73 for 2 Pianos, Brahms’ Variations on a Them by Schumann, Op. 23, Liszt’s Les Préludes, Symphonic Poem No. 3, the Korngold Piano Quintet in E Major, Op. 15, Bartók’s Sonata for 2 Pianos and Percussion Sz 110, Granados’ Piano Quintet in G minor Op. 49, Stravinsky’s Firebird Suite (1919) – Version for 3 Pianos by Carlo Maria Griguoli, Schnittke’s Piano Quintet Op. 108 and the Gershwin/Grainger Fantasy for Two Pianos on Gershwin’s Porgy and Bess.

Few artists have nurtured and promoted emerging young musicians with the level of personal commitment shown by Martha Argerich. In the process, she has created inspired and inspirational chamber music partnerships mixing established and up-and-coming artists. A legend in her own lifetime for her technical mastery and passionate artistry, Argerich possesses an infectious spirit that has fired her own performances and partnerships as well as those of her colleagues and protégés.

Reviewing the CD set highlighting the 2007 Festival, The Financial Times wrote, “The music flies off the page, like a high-calibre jam session in which the participants throw away worldly cares and listen to each other in the moment of performance. There's polish aplenty, as one might expect of well-established musicians, but more to the point, the CD radiates the freshness and electricity of a special occasion. What's so endearing about Argerich's festival concept is that she blends younger players with more experienced colleagues, so there's a cross-fertilisation of ideas. Even when she plays no part … the same invigorating spirit presides.” Gramophone said, “Martha Argerich can put you on alert with just one phrase. A sequence of phrases … becomes the aural embodiment of an archer drawing a bow to maximum stretch. …. The tension is palpable, [the] artists playing into the music to extract all it offers - and clawing listeners out of themselves.”

The ninth season of the Martha Argerich Project takes place in June 2011. Many of the artists on these CDs will take part again this year.

the sustained quality of music-making on display here ensures that the collective result is something much more than a high-powered musical love-in...her approach [to the Chopin] is as fresh as ever, and she brings to the music a sense of unexaggerated surrounding immensity in the way that only great artists can...the articulation and control [in the Bartok] are so superb that the work's magisterial power truly comes across.

the 2010 edition strikes me as among the best...It includes two electrifying Schumann performances from Argerich and the Capuçon brothers...plus an equally stunning Bartók Sonata for two pianos and percussion featuring Argerich with ex-spouse Stephen Kovacevich...To cap it all, Argerich returns to her youth with a sensational Chopin Piano Concerto No 1, digging into the music’s expressive core as never before.

if I was to pick one instance of the electricity and expressive freedom encountered on these three CDs it would have to be Argerich's recreation of Chopin's First Concerto...she has rarely sounded more vehement, personal or beguiling. As for the finale, I doubt whether it has ever been played with a more riotous or consuming brilliance in its entire history...All in all, these discs are a reminder of a unique, formidable and ever-enchanting artist.

Even when Argerich is not directly involved, her unique musical spirit seems to hover over the performances; there's a freshness, a sense of discovery, about all the playing here, and it's never dull.

Argerich encourages many youthful talents to blossom; she is joined by her former partner Stephen Bishop-Kovacevich for a fine Bartók sonata for two pianos and percussion, rhythmically focused but never brittle...Her solo turn is Chopin's First Concerto, eloquently shaped, with the most rivetingly exuberant finale you could hope to hear.