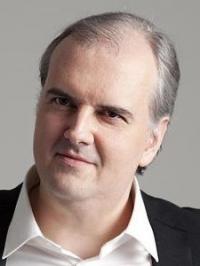 The American pianist Nicholas Angelich was born in Cincinnati in 1970 and received his first piano-lessons from his mother, making his public concerto debut at the age of just seven; his formal musical education took place at the Conservatoire de Paris, where he was a pupil of Yvonne Loriod and Aldo Ciccolini. Early successes included prizes at the Gina Bachauer International Piano Competition and Robert Casadesus International Piano Competition, and the Young Talent Award at the International Klavierfestival Ruhr in 2002.

His debut solo recording of Rachmaninov’s Études-Tableaux was released on Harmonia Mundi in 1995; ten years later he embarked on a critically-acclaimed series of Brahms recordings on Erato, including the Piano Trios, Piano Quartets and Violin Sonatas with the Capuçon brothers (‘sure to kindle anyone’s enthusiasm for Brahms’ – Gramophone), the concertos with Paavo Järvi and the Frankfurt Radio Symphony Orchestra, and several discs of solo repertoire. His discography also includes the Beethoven Triple Concerto (again with Järvi and the FRSO), and several appearances on the series of live recordings from Martha Argerich’s Lugano Festival, where he was a frequent visitor.

His solo album Dedication (released in 2016 and featuring music by Liszt, Schumann and Chopin) was Gramophone’s Disc of the Month, the review observing that ‘[his] magisterial virtuosity is uniquely contemporary, even as his imaginative grasp easily encompasses a persuasive vision of the 19th-century ethos’.

Find out more at https://en.wikipedia.org/wiki/Nicholas_Angelich

The American pianist, who was particularly noted for his powerful interpretations of Brahms's solo piano works and chamber music, has died aged 51.