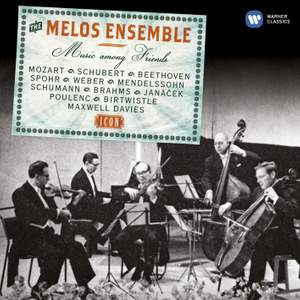 There is plenty of individual personality in the music-making here, but how beautifully these fine musicians blend together as a group...the polished elegance and charm of their playing cannot... — Penguin Guide, 2011 edition More…

Beethoven: Sextet for Horn and Strings in E flat major, Op. 81b

Reger: Vivace from Clarinet Quintet in A

Prokofiev: Overture on Hebrew Themes, for orchestra, Op. 34b

I. The Committee Meeting (Moderato)

V. In the Tube at Oxford Circus (Allegro energico)

The Melos Ensemble was formed by musicians who wanted to play chamber music scored for a larger ensemble in a combination of strings, winds and other instruments with the quality of musical rapport only regular groups can achieve.

All its members were excellent musicians who held positions in notable orchestras and appeared as soloists.

Planned as a group of twelve players – string quintet, wind quintet with piano and harp – this could be expanded by other players to perform an enormous range of works from Mozart through the classics and romantics of Beethoven, Schubert, Mendelssohn, Schumann and Brahms to Bartók, Janácek, Nielsen, Poulenc and Khatchaturian. They also gave first performances and then recorded works by four then young British composers: Richard Rodney Bennett, Harrison Birtwistle, Gordon Crosse and Peter Maxwell Davies.

Many of the recordings are classics of the Gramophone and have been rarely out of the catalogue. Here is a set bringing together all their recordings made during those fifteen halcyon years of glorious music-making.

There is plenty of individual personality in the music-making here, but how beautifully these fine musicians blend together as a group...the polished elegance and charm of their playing cannot be heard to better effect than in the lovely Mozart Clarinet Quintet and Kegelstatt Trio, with Gervase de Peyer's beautiful solo playing richly limpid yet vital, and first-class recording.