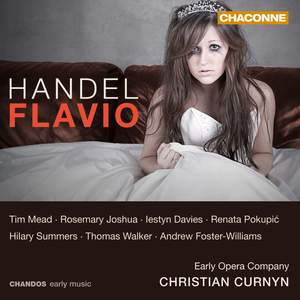 Although Flavio, premiered in 1723, deals with motives of love, honour, and duty, the tone is domestic, with less emphasis than in many other operas on political or military changes of fortune. Though hardly a comedy, it does seem to move to a more detached view of human interactions. The action is set in Lombardy during the dark ages: the stratagem of sending unwanted individuals away to govern Britain – striking overtones of honour and punishment – would no doubt have been taken humorously by the London audiences.

The music embraces a wide variety of emotions, with duets, one for each pair of lovers, framing the beginning and end of the opera. In Act III, as one lover pleads the case of his rival, the ambiguity of the situation causes a splendid ironical frisson in the plot, reflected in the music. Handel revived Flavio once, in 1732, its modest success in its day reflecting the tastes of contemporary audiences rather than its musical or dramatic quality. It is far better appreciated today as one of the composer’s most inventive operas, full of the varied imagination, superb arias, and excellent melody we expect from Handel’s best operas.

Founded in 1994 by its music director, Christian Curnyn, the Early Opera Company is now firmly established as one of Britain’s leading early music ensembles. The Company’s debut production of Handel’s Serse led to an invitation to perform at the BOC Covent Garden Festival, and this was followed by three performances of Ariodante. In 1998 the Company made its debut at St John’s, Smith Square with a concert performance of Charpentier’s Actéon and Purcell’s Dido and Aeneas and was invited to stage Handel’s Orlando at the Queen Elizabeth Hall as part of the South Bank Early Music Festival.

Since then the Company has performed at many leading festivals. Highlights have included productions of Dido and Aeneas at the Vic Early Music Festival in Spain, Handel’s Agrippina at St John’s, and Handel’s Partenope at the Buxton Festival and the Snape Proms at Aldeburgh.

For Chandos, Christian Curnyn and the Early Opera Company have recorded Handel’s Partenope and Semele (winner of the 2009 Stanley Sadie Handel Recording Prize) and Eccles’s The Judgment of Paris.

Curnyn and his spruce period band finely catch the tone and tinta of his delectable opera. Tempi - mobile but never frenetic - are aptly chosen, rhythms buoyant...The singers, many of them Curnyn regulars, dispatch their arias with fine Handelian stye and spirit, and, crucially, bring real theatrical vitality to their recitative exchanges.

Joshua's gleaming, agile soprano remains on pristine form for such an experienced Handelian and she's a consistent pleasure...Davies's Guido...is a major achievement for the young countertenor in his first starring role on disc...dashing off the coloratura volleys of 'Rompo i lacci' with insouciant ease and consistently pearly tone