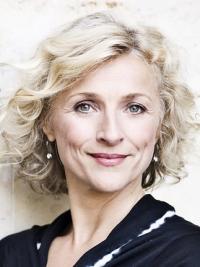 Welsh light lyric soprano Rosemary Joshua was born in Cardiff in 1964 and trained at the Royal College of Music, making her professional debut in Handel’s Orlando at Aix-en-Provence; Handel has played a central role in her career, and her discography includes the title-roles in Semele and Partenope (for Christian Curnyn and Early Opera Company on Chaconne) and Esther (for Laurence Cummings on Somm), Michal in Saul, Angelica in Orlando, Romilda in Serse, Emilia in Flavio, and an album of duets with mezzo Sarah Connolly (‘Joshua, in particular, conveys infectious delight in this sophisticated music’ [ BBC Music Magazine). Her repertoire also includes Sophie Der Rosenkavalier, Anne Trulove The Rake’s Progress, Titania A Midsummer Night’s Dream, and Janáček’s Cunning Little Vixen.

In 2018 Joshua became Artistic Director of the Young Artists programme at Dutch National Opera, a company for which she worked regularly earlier in her career.

Find out more at https://en.wikipedia.org/wiki/Rosemary_Joshua