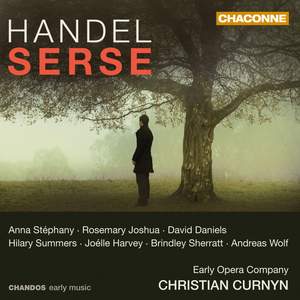 No. 28, Arioso "Signor, Signor, lasciate fare a me" Allegro (Elviro)

No. 46, Aria "Dirà che amor per me" Andante allegro (Atalanta)

No. 47, Recitativo "Voi quel foglio lasciate a me per prova" (Serse)

The main character is the unpredictably obsessive and volatile King Xerxes, a historical character who ruled the Achemenid Empire from 486 BC to 465 BC. The plot concerning the rivalry between Xerxes and his brother, Arsamene, for Romilda, however, is entirely fictional, as is the King’s betrayal of his fiancé, Amastre.

The opera is based on a libretto adapted by the poet Silvio Stampiglia for Giovanni Bononcini, whose setting was staged at Rome’s Teatro di Torre Nona in 1694. Handel completed his opera in 1738 in little more than a month. However, his typically swift pace and resourceful treatment of musical themes and models should not be misconstrued as complacency, carelessness, or low imaginative powers. The autograph manuscript reveals that Handel invested considerable skill in arias that are perfectly tailored to the dramatic storyline, many of which were meticulously crafted and then redrafted.

The opera was premiered at The King’s Theatre on the Haymarket on 15 April 1738, but it only received five performances, which at the time ranked it as one of Handel’s worst commercial failures. The opera was not performed again until Oscar Hagen’s arrangement was staged at Göttingen in 1924, after which several productions in the USA and the UK followed. In recent times, the work has finally received the recognition it deserves, partly thanks to the uncut production, mounted at English National Opera to mark the composer’s 300th birthday in 1985.

Serse is here performed by the Early Opera Company under Christian Curnyn, who won a BBC Music Award in 2013 for its recording of Handel’s Alceste. They are joined on this recording by a host of excellent soloists including Rosemary Joshua in the role of Romilda, Anna Stéphany as Xerxes, David Daniels as Arsamene, and Hilary Summers as Amastre.

an extremely classy account...Stéphany can compete with the best of today’s mezzos: she combines feeling, dignity, elegance...this really is a baroque vocal feast...Curnyn shows such an easy command of the idiom: there is no aggressive accenting or exaggeration of tempo.

Stephany sings superbly...Joshua far eclipses her counterparts on the rival recordings, singing with sweet, sensuous tone and characterising deftly...Summers suggests the pathos as well as the outrage of Serse's wrong fiancee Amastre...this beautifully recorded new version is the one to go for.

Replacing an indisposed Sarah Connolly at short notice, Anglo-French mezzo Anna Stéphany stamps her own authority and temperament on the title-role on Christian Curnyn's new recording of Serse with the Early Opera Company, starring David Daniels as Arsamene and Rosemary Joshua as Romilda.

[This] goes to the top of the list of original-language performances on disc...thanks to the conductor’s unerring sense of style...[Stéphany] launches the opera raptly...and is fearless in the two great bravura scenes...[Daniels's] lamenting arias approach the sublime here. A total success.

[a] flowing, affectionate and beautifully shaped reading...The cast is superb throughout...But it's Anna Stéphany's show: she sweeps all before her as a magnificent Serse. This is one of the most consistently satisfying current Handel opera recordings.

With its short, tuneful arias and amorous imbroglios, Serse is delectable baroque entertainment, and the Early Opera Company’s polish and vivacity seem a fair exchange for Curnyn’s downplaying of the broader humour on offer.

Stéphany does a good job with the unstable Xerxes, snapping between sentimentality and psychopathy, and sings the part forcefully and with character...Curnyn conducts with spirit, though things flag a bit at the beginning of Act 3.