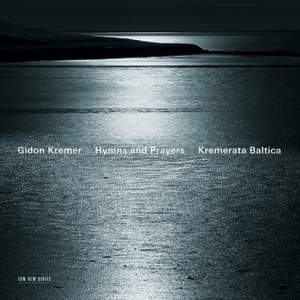 Beautifully-recorded album from master violinist Gidon Kremer and his Kremerata Baltica, spanning a wide range of music, from the spirited to the spiritual, all of it broached with conviction. Intensity and concentration, differently calibrated, are the watchwords here. At the centre is César Franck’s massive Piano Quintet, flanked by works of a ‘spiritual’ cast by Stevan Kovacs Tickmayer and Giya Kancheli, currently celebrating his 75th birthday.

Franck’s Piano Quintet in F minor is the work in which the Belgian-French composer is perhaps at his most impassioned and melodically inventive. BBC Radio 3 New Generation Artist, Georgian pianist Khatia Buniatishvili (b 1987), in her ECM debut, gives a bold and compelling performance.

Gidon Kremer and Giya Kancheli have a long association that’s resulted in several ECM recordings, including the superb ‘Lament’, and ‘Time...and Again’ and ‘V & V’ on the album In l'istesso tempo. Silent Prayer was composed on the occasion of the 80th birthday of Mstislav Rostropovich and the 60th birthday of Gidon Kremer in 2007 and is dedicated to these two great musicians, both among Kancheli's closest friends. After Rostropovich died shortly after his birthday, the composer entitled the just-finished work ‘Silent Prayer’.

Long a champion of original compositional voices, Kremer presents also music by Stevan Tickmayer, born in the former Yugoslavia in 1963, and currently resident in France. A musician of diverse background, Tickmayer has been studying with Kurtág since the mid-

90s. He began his Eight Hymns in December 1986, on learning of the death of his favourite filmmaker, Andrei Tarkovsky, and played the (unfinished) work in his solo concerts for several years. He revised it in 2003 after working with Kremerata, “the ideal messengers” for this musical mourning.

Gidon Kremer’s relationship with ECM dates back to the legendary album Tabula Rasa from 1984 that put Arvo Pärt on the map. It was followed by several volumes from his famous Lockenhaus festival – from where the performances on this new CD also emanate. Kremer’s second recording of the Sonatas and Partitas for unaccompanied violin by Bach, released in 2005 on ECM New Series, met with unanimous international acclaim.

Buniatishivili delivers a bravura performance of the first movement's powerful arpeggios and octaves, and the finale is strongly characterised, the almost modernistic sul ponticello tremolando strings creating a real sense of forward momentum

No one could accuse Gidon Kremer of taking the easy option when it comes to programming, and so it proves on this disc...this new account [of the Franck], lucidly recorded, is one to reckon with - heard in context or isolation.

Two recent pieces by post-Soviet east Europeans...frame a febrile, sinewy account of César Franck's Piano Quintet, in which Kremer is joined by the pianist Khatia Buniatishvili and a group including the outstanding viola player Maxim Rysanov.

Hymns and Prayers combines three works from disparate eras whose moods fit together in a pleasingly astringent manner...The modern pieces are separated by César Franck's "Piano Quintet in F-minor", the lachrymose tone of which works surprisingly well in the context.