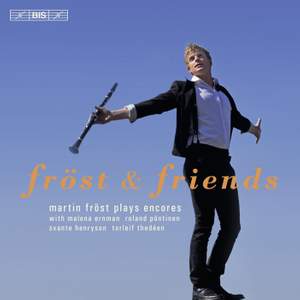 Obviously a must for clarinettists; but other performers, and listeners too, will enjoy this demonstration of what can be achieved with impeccable technique, a fertile imagination and a light... — BBC Music Magazine, November 2010, 5 out of 5 stars More…

A calendar filled with orchestral concerts and chamber recitals in many of the world’s most prestigious venues has given the clarinettist Martin Fröst ample opportunity to develop a wide range of encores, for every occasion. Known for the imaginatively themed concert programmes he devises with various musician friends, he has also explored a number of musical genres.

These aspects of his artistry are both demonstrated on this constantly engaging disc, which includes immortal gems such as Rachmaninov’s Vocalise and Kreisler’s Liebeslied as well as pieces rather less usual in a classical context: Charlie Chaplin’s Smile and the klezmer traditional Let’s Be Happy.

Throughout the programme Fröst receives the expert support of the pianist Roland Pöntinen, a chamber music partner of long standing who has also been involved in devising many of the imaginative arrangements, for instance of Vittorio Monti’s Csárdás. Three other musical companions of Fröst’s make cameo appearances, with mezzo-soprano Malena Ernman joining the clarinet in the head-long flight of not one, but two bumble-bees. Torleif Thedéen’s cello sings a heartfelt Ave Maria while Svante Henryson, also a cellist, plays in his own duo piece Off Pist.

“His virtuosity lies in his exceptional dexterity and agility…and in his daring control of the instrument’s dynamic and expressive extremes.” The Times

Obviously a must for clarinettists; but other performers, and listeners too, will enjoy this demonstration of what can be achieved with impeccable technique, a fertile imagination and a light touch.

This disc not only presents the brilliant Swedish clarinettist Martin Fröst in a dazzling range of encore pieces but, with the help of his own explanatory notes, also provides a charming potted autobiography...altogether a wonderful showcase for a superb artist.