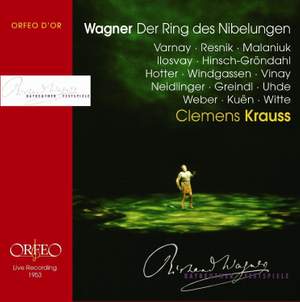 Act I Scene 1: Was am besten er kann (Siegfried, Mime)

Clemens Krauss appeared for only one year at the Bayreuth Festival, yet he had conducted several Richard Strauss premières and held the reins, at the peak of his career, of both the Bavarian and Vienna State Operas as well as the Salzburg Festival. Krauss’ first Ring should have been the beginning of a magnificent era, that it was not, was due to his tragic death in Mexico in the spring of 1954 during a concert tour.

Krauss’ work with the Festival’s Sängerensemble gave a much-needed shake-up, with new blood in certain important roles. Hence Wolfgang Windgassen, having debuted at the Festival as Parsifal and as Froh, sang both Siegfried instalments in 1953, rising to peak form in the third act of Götterdämmerung, making the role his own. Gerhard Stolze, powerful of tone and clear of articulation, was to follow similar heroic paths. As Mime, Paul Kuën was sought-after from Munich to the Met as well as in Bayreuth, where with playful facility he found the path through Hans Knappertsbusch’s epic breadth, Joseph Keilberth’s chamber-opera transparency and Krauss’ thrusting impulsiveness alike. The same goes for Gustav Neidlinger as Alberich: a monolithic vocal presence and expressive power virtually beyond equal. As his stage progeny Hagen, Josef Greindl was setting his own personal crown on a Festival season where his contribution as König Heinrich in the opening night’s Lohengrin was as instrumental as his Fafner and Hunding on the Ring’s earlier evenings. And, after a year’s warm-up, Hans Hotter too had become a genuine institution on the green hill. Ira Malaniuk, with her mellifluous mezzo-soprano had become firmly established at Bayreuth after deputising as Fricka a year earlier. Few would have guessed in 1953 that she would be followed as Fricka by Regina Resnik, at the time still very much a soprano, albeit with a naturally sensual and dark vocal colour. Erstwhile baritone Ramón Vinay was garnering acclaim as both Parsifal and Siegmund, having triumphed as Tristan the previous year. Astrid Varnay was one of his two partners that summer, en passant as Ortrud and Brünnhilde, making her mark at last as the most flexible dramatic soprano of her generation. Here was a real ensemble at work, as attested by the total commitment of such artistes as Ludwig Weber, Hermann Uhde - luxury casting as Donner and Gunther - Erich Witte's nimble Loge, Natalie Hinsch-Gröndahl's Gutrune or Rita Streich's vivacious Woodbird. The sound balance pleased Krauss from the off as it emanated from the concealed orchestra pit - as it at last does now, unoccluded, transferred to CD from the original tapes, - although his taut tempi and nuances, here filigree-painted, there crushingly-accented, at times come at the cost of fine co-ordination with the stage. This, however, enhances the vitality of the live recording and it remains eminently regrettable, in the context of ‘Werkstatt Bayreuth’, that Krauss only had the summer of 1953 to shape his sound-vision of Wagner's music dramas in the ‘sacred place’.

[Krauss] favours a more transparent sound than Furtwängler and faster-moving tempi which give his Ring integrity, propulsion and unusual clarity...Hotter's towering dramatic portait of Wotan...[is] a linchpin of the Krauss cycle...Erich Witte's slyly articulated, sardonic Loge and Paul Kuen's rivetingly sung - not yelled or whined - Mime are both outstanding too...this Ring is a true collector's item and it is good to have it in Orfeo's handsome 13-disc presentation

the cast...[is] headed by Astrid Varnay as a wonderfully warm Brünnhilde and Hans Hotter as Wotan, his sound even more languidly beautiful than it is on the 1956 cycle conducted by Keilberth...Krauss's conducting is the main interest here – more sensuous, more concerned with orchestral sonority than Keilberth, though sometimes at the expense of dramatic clarity.