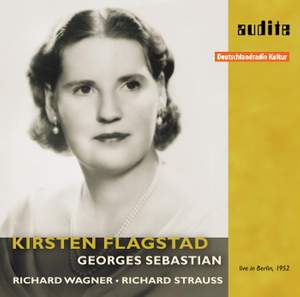 the splendour of her sound and the depth of her feeling make these excerpts indispensable — BBC Music Magazine, December 2010, 5 out of 5 stars More…

No. 3. Im Treibhaus (In the Hothouse)

No. 3. Beim Schlafengehen (At Bedtime)

No. 4. Im Abendrot (In the Evening Glow)

These recordings were made on 9 and 11 May 1952 and document the latter part of Kirsten Flagstad’s career. They were made a few weeks before her 57th birthday, thus at a time when most sopranos will have been forced to move into ‘character fach’, the Norwegian soprano however, was still in almost full command of her incomparably rich voice, even after a demanding career spanning over three decades. These recordings of two concerts given at the Berlin Titania-Palast, with the Orchestra of the Municipal Opera, are particularly noteworthy: on the one hand, the Wagner songs sound fresher and more present than in the recording made four years later under Knappertsbusch; on the other, the Berlin live-recording of the Strauss songs is technically far superior to the recording made in London. In May 1950 Kirsten Flagstad had given the first performance of the Four Last Songs by Richard Strauss, at the request of the composer. A tribute to her unique status was also the multitude of her concert engagements: During the course of her career, she sang more than 80 roles in around 2100 performances and also gave approximately 250 concerts with orchestra and 600 recitals.

The voice is still stupendous in these live recordings from 1952, when she was 57 — even, seamless, lustrous, impeccably in tune, incomparably heroic, yet capable of great tenderness...it is hard to imagine Isolde’s Liebestod more beautifully sung or Strauss more sumptuously phrased.