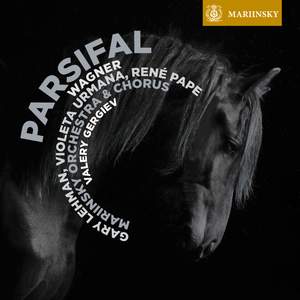 What really distinguishes this...is Gergiev. His reading is vivid and luminous, generally expansive but with fluidly shifting tempos, unashamedly guilty of theatrical excitement. Yet he evokes... — BBC Music Magazine, October 2010, 5 out of 5 stars More…

Recording of the Week,  Wagner's Parsifal from the Mariinsky and Gergiev

The Mariinsky Theatre has a long association with Wagner’s music. The composer himself conducted at the Theatre, which in 1863 was the location of the first performance of music from his as yet unstaged Ring Cycle. Over the past decade Valery Gergiev has become a frequent conductor of Wagner’s operas, establishing a formidable reputation in the repertoire, although remarkably this is his first recording of the composer’s operas.

Wagner described his final complete opera as a ‘A Festival Play for the Consecration of the Stage’ and the work has always sparked controversy, mixing moral and religious themes with music of irresistible sumptuousness. The opera was inspired by Wolfram von Eschenbach’s Arthurian poem Parzifal. Yet despite the story’s overt Christian imagery, Wagner also draws on ideas from other beliefs including Buddhism. The ‘harmonic experiments’ that he adopted for his previous opera Tristan und Isolde are further refined to create music of astonishing beauty that still retains and reflects the deep morality of the tale.

Recording took place between 5 and 13 June 2009 at the Mariinsky Concert Hall in St Petersburg, incorporating live concert performances. It was recorded in high resolution multi-channel DSD by award-winning producer James Mallinson and engineered by John Newton and Dirk Sobotka. Parsifal will be the fourth opera on the Mariinsky label. Previous releases have included Shostakovich’s The Nose, Shchedrin’s The Enchanted Wanderer and Stravinsky’s Oedipus Rex, which have collected numerous international awards. The Nose, the label’s debut release, also received two Grammy Award nominations.

“Above all, this is Gergiev's Parsifal and it is the superlatively good playing of the Mariinsky Orchestra that, with René Pape's gloriously sung Gurnemanz, makes this new set essential listening for Wagnerians” Hugh Canning , IRR September

What really distinguishes this...is Gergiev. His reading is vivid and luminous, generally expansive but with fluidly shifting tempos, unashamedly guilty of theatrical excitement. Yet he evokes a rapt quality which does convey an authentic spirituality - passionate 'Russian soul', perhaps, rather than sombre Germanic brooding, but if so, so much the better.

[Gergiev delivers] a reading full of emotional intensity and he's helped by an impressive team of soloists. Gary Lehman is powerfully clarion-like in the title role and Rene Pape is an authoritative Gurnemanz...Urmana's Kundry, full of self-loathing, passion and longing, is hard to forget.

... it’s for René Pape’s majestic Gurnemanz that Wagnerites will want this set. Violeta Urmana’s Kundry is unexpectedly voluptuous, while Gary Lehman makes a conscientious Parsifal...sceptics should be won over by the way his wonderful orchestra and chorus bring Wagner’s problematic swansong to life.

...on grounds of the general excellence of its singers and the cumulative authority of the interpretation, this is a performance to be reckoned with...it has an imaginative force, overall, which pushes any hints of contrivance to the musical and dramatic margins.

Above all, this is Gergiev's Parsifal and it is the superlatively good playing of the Mariinsky Orchestra that, with Pape's gloriously sung Gurnemanz, makes this new set essential listening for Wagnerians...[Pape's] beautifully rounded tone and poetic diction make musical highlights of his long monologues

The great strengths of his performances in the theatre here underpin at least one remarkable performance: René Pape's outstanding Gurnemanz. Gary Lehman's Parsifal is competent, while Violeta Urmana's Kundry mixes thrilling moments with unstable ones. Gergiev's conducting is more than sufficient compensation for those minor shortcomings, though.

His approach is vigorously dramatic and red-blooded, treating this massive score as an urgent call to arms rather than a dreamy meditation. The Mariinsky Orchestra plays with glowing commitment throughout...Lehman is an agreeably youthful Parsifal, bright in voice and clear in diction...Evgeny Nikitin and Nikolai Putilin bring a distinctively Russian intonation to Amfortas and Klingsor.

a glowing, spacious, near-flawless performance. The solid cast, headed by the tenor Gary Lehman as Parsifal, includes the greatest Gurnemanz of our time: the bass René Pape, in resplendent voice.