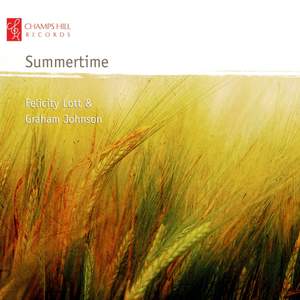 Quilter: Who is Sylvia

Arne: Where the Bee Sucks

Bernstein: My House: My House

“ Summertime also has many of my favourite songs in English, French and German. We made the CD at a friend`s house, and the sessions were so relaxed, with no London traffic to cause endless retakes! It`s a real mix of beautiful songs of all kinds, on a summer theme. I chose songs I loved, from Gershwin to Christopher Robin….

Three centuries of song are represented here, and, as BBC Music Magazine's Hilary Finch put it “such is the skill of Johnson's programming that the entire recital seems to be a single, sustained exhalation of rapture and reflection”

She went on to say:

The upper reaches of Lott's still gleaming soprano inhabit Barber's 'Shining Night' and Fauré's Clair de lune'. And her robust English version of Schubert's 'Who is Sylvia?' finds an irresistible companion in Arne's 'Where the Bee Sucks', with its veritable midsummer night's dream of an accompaniment from Johnson. The artists' palpable sense of joy and well-being gathers momentum as they visit Berlioz's 'L'île inconnue' and as they sing on the water with Schubert. . . . And Lott and Johnson know well that the only way to face sentiment is to acknowledge its own integrity, as they do when they listen to Haydn Wood's 'Little Brown Bird' and eavesdrop with Fraser-Simson on Christopher Robin saying his prayers.