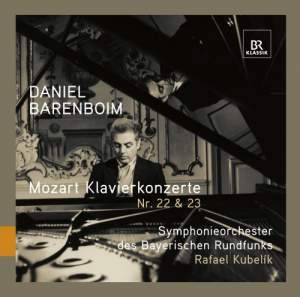 Barenboim’s rubato playing is deliciously tempered. He ekes out all possible emotional without it becoming cloying, masterfully displaying his interpretative powers. He calls on the Symphonieorcherster... — Daniel Ross, bbc.co.uk, 28th April 2010 More…

Daniel Barenboim ranks as one of the greatest Mozart interpreters of the 20th century. Among his recordings of Mozart’s piano concertos, there have thus far been no releases with Rafael Kubelík – Barenboim’s deeply admired conductor and “brother in spirit”. Both interpreters were united by the same musical approach, a striving for uncompromising clarity in phrasing and structure. The result is a highly vibrant, exemplary recording of two of Mozart’s most significant piano concertos. In 1970, the year the recording was made, Kubelík had already been Chief Conductor of the Symphonieorchester des Bayerischen Rundfunks for nine years and had led the ensemble to international renown.

Barenboim and Kubelík, an ideal pair of interpreters for Mozart.

The continuation of the BR-KLASSIK ARCHIVE series following the successful launch with Martha Argerich.

“Mozart’s A major Concerto K. 488, played by Daniel Barenboim (…) was more than just a pleasure – it was likewise the revelation of the unfathomable in Mozart’s music.” Süddeutsche Zeitung, June 1970

Barenboim’s rubato playing is deliciously tempered. He ekes out all possible emotional without it becoming cloying, masterfully displaying his interpretative powers. He calls on the Symphonieorcherster des Bayerischen Rundfunks in a confidently authoritative style, making the smallest gestures possessive of the most dramatic power.

The Bavarian performance is totally without self-indulgence, bright and perky in the outer movements and finding truly touching simplicity in the intense Andante. Barenboim is brilliantly virtuoso but never too big for his boots...this is an exhilarating rediscovery.