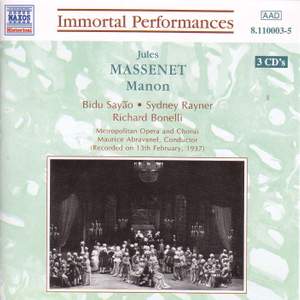 Act I: Hola, He, Monsieur L'hotelier!

Act I: Allez! a l'auberge voisine

Interview With Lucrezia Bori, Transmitted During The Inverval, On Previous Performances Of Manon.

Manon was Sayão's debut at the Met and introduces us to the exquisite, already accomplished art of this marvellously beautiful and gifted soprano. Sayãos New York debut with Toscanini and the New York Philharmonic in 1936 is the only other work which captures Sayão in all the dazzling beauty of her early voice.