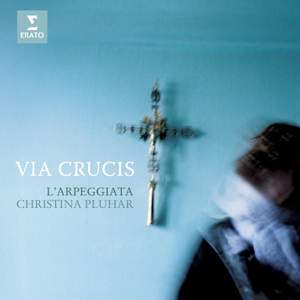 the sound they make is gorgeous, lush in texture, with splendid performances from soprano Nuria Rial and countertenor Philippe Jaroussky...Like the vocalists, the instrumentalists of L'Arpeggiata... — BBC Music Magazine, May 2010, 4 out of 5 stars More…

Mediterranean passion – of a religious nature -- inspires L’Arpeggiata’s new collection, an encounter between works by the 17th century Italian composers Sances and Merula and traditional music from Italy and Corsica.

L’Arpeggiata, the French-based ensemble directed by Austrian-born harpist and lutenist Christina Pluhar, releases its second Virgin Classics album, following Teatro d’amore, a programme of Monteverdi which blended instruments and voices, score and improvisation in a kind of sublime Baroque jam session. Figaro magazine observed that “L’Arpeggiata invests Monteverdi with a dazzling array of vocal and instrumental colours. A touch of improvisation raises the singing to an incandescent level … A unique distillation of explosive vitality,” while the leading German news magazine Spiegel exclaimed: “Roll over, Monteverdi“; it is a long time since classical music has held so many surprises or taken such a broad view.“

L’Arpeggiata has made a speciality of exploring and exploiting the close links between Baroque repertoire and the traditional music of the Latin world and its characteristic forms such as the tarantella, the folia or the canario. In this new collection, Via Crucis, ‘the way of the Cross’, the focus is on the pervasive presence of religious feeling in Southern Europe. The Passion of Christ evokes the same fervour in composers such as Giovanni Felice Sances (1600-1679) or Tarquinio Merula (1594-1665) – both active in northern Italy -- as it does in the streets of Naples or the villages of Corsica. The two main works in the collection are Sance’s extraordinary Stabat Mater and Merula’s Hor ch’e tempo di dormire, in which the Virgin Mary lulls her baby to sleep while weeping for his future suffering and both enthrall the listener with a basso ostinato and hypnotic swaying rhythms.

Reviewing Teatro d’amore, L’Education musicale wrote that: “Ingeniously chosen vocal works are interspersed with important instrumental pieces, taking us on a supreme journey through Monteverdi. The communicative energy and the intense sculptural beauty of pieces like the final duet from L’incoronazione di Poppea or rich sequences of madrigals are transformed by an ensemble that is palpably composed of soloists. Most astonishing of all – and this is a significant discovery – is the modernity that lurks in this music … A Venetian piece from 1664 makes one wonder whether it’s a matter of Monteverdian style or jazz rhythms. … The addition of two exceptional voices adds further appeal to this fusion of genres : Philippe Jaroussky, whose angelic timbre fills the lines blissfully and Nuria Rial, who brings a velvety tenderness. When they come together the mood reaches sensual heights. This is far more than a compilation … it is music in its truest manifestation.”

Rial and Jaroussky feature again on Via Crucis and they are joined by the male vocal quartet Barbara Furtuna (Corsican Choir), whose earthy, but highly-disciplined sonorities evoke centuries of Mediterranean culture.

the sound they make is gorgeous, lush in texture, with splendid performances from soprano Nuria Rial and countertenor Philippe Jaroussky...Like the vocalists, the instrumentalists of L'Arpeggiata perform with an affective sincerity that is undiminished by clarity of articulation.

[L'Arpeggiata's] fertile improvisations above these old bass patterns have never sounded more colourful...While the players get busy below, Rial and countertenor Philippe Jaroussky play it straight on top, staying focused and simple-toned.

...a fascinating programme of motets and meditations on the Passion...Pluhar is a more-is-more director, decorating the simplest folk melodies with cornetto divisions and glistening chords

Concept discs uniting early music with folk music can be suspect, but this one is very classy...Pluhar's arrangements are stylishly varied.