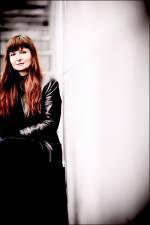 After studying guitar in her home city of Graz, she graduated in lute with Toyohiko Sato at the Hague Conservatoire. She was awarded the 'Diplôme Supérieur de Perfectionnement' at the Schola Cantorum Basiliensis with Hopkinson Smith. Then she studied with Mara Galassi at the Scuola Civica di Milano.

In 1992 she won the 1st Prize in the International Old Music Competition of Malmö with the ensemble La Fenice. She founded the Arpeggiata ensemble with which she has made a series of CDs for the Alpha company.

Recording of the Week,  Monteverdi as you've never heard it before!

Christina Pluhar and L’Arpeggiata make their debut on Virgin Classics with a fascinating exploration of Monteverdi’s ‘Theatre of Love’, aided by superb contributions from Philippe Jaroussky and Nuria Rial.