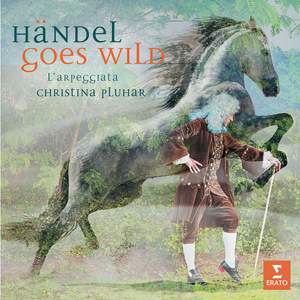 Whether or not you like this kind of project, this one is expertly and beautifully done, with Handel’s lyrical greatness remaining plain for all to see. — Gramophone Magazine, October 2017 More…

Handel: Sinfonia, "The Arrival of the Queen of Sheba" (From Solomon, HWV 67) [Arr. Pluhar]

With Händel Goes Wild Christina Pluhar and her ensemble L’Arpeggiata once again embark on some musical time travel, this time in the company of soprano Nuria Rial, countertenor Valer Sabadus and jazz clarinettist Gianluigi Trovesi. The album features sumptuously reimagined versions of some of Handel’s most celebrated operatic arias. “All baroque composers used strict forms,” explains Christina Pluhar, “but those forms would also allow the singers and musicians to improvise and add ornament freely.” Highlighting the composer’s dynamism and temperament, she says: “Handel must have been pretty wild himself.”

George Frideric Handel now joins Purcell, Monteverdi and Cavalli on the list of composers who have inspired an album by Christina Pluhar and her ensemble L’Arpeggiata.

The title of this new album refers first and foremost to the imaginative treatment his music receives from L’Arpeggiata, but Christina Pluhar reminds us that “Handel must have been pretty wild himself,” quoting this famous anecdote: “At a rehearsal for his opera Ottone, when the celebrated soprano Francesca Cuzzoni refused to sing the aria ‘Falsa immagine’, he became so furious that he grabbed her round the waist and threatened to throw her out of the window.”

Fortunately, the ‘wildness’ on this album is purely pleasurable. Händel Goes Wild is in the beguiling vein of Music For A While – Improvisations on Henry Purcell, released by L’Arpeggiata on Erato in 2014. Praising that album, BBC Music Magazine wrote: “Long experienced in fusing Baroque with jazz-inspired performance styles, L'Arpeggiata's approach breathes new life into the Restoration composer, whose ground basses are akin to riffs, his melodies folk-like in their raw simplicity ... Baroque instruments and a jazz-style combo mix to intriguing effect

Whether or not you like this kind of project, this one is expertly and beautifully done, with Handel’s lyrical greatness remaining plain for all to see.

I wouldn’t say wild exactly, but Handel does go a bit off-road on this polished jam session from L’Arpeggiata...It’s sometimes hard to know who is winning – and, for anyone who doesn’t hate this disc immediately, that will be part of the appeal.