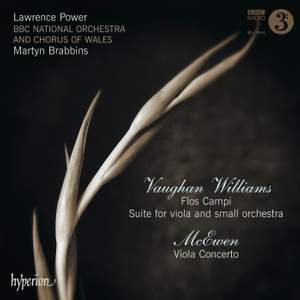 [Power's] every phrase pulsates with an inner glow. He also captures unerringly the sense of mystery and veiled threat that haunts the unforgettable Flos Campi...The McEwen Concerto is a three-movement... — Classic FM Magazine, February 2012, More…

Lawrence Power has established himself as the most sought-after violist of his generation and his sumptuous tone and persuasive interpretations have lead to many comparisons with the pioneering British violist Lionel Tertis. Indeed, the three works on this disc were written for Tertis, who did so much to broaden the instrument’s musical repertoire and raise its status to an accepted solo instrument.

The two Vaughan Williams works display an unabashed romanticism and pastoral elegance. Flos Campi, meaning ‘Flower of the field’, was completed in 1925 and puzzled audiences with its ambiguous form and unusual orchestration.

Despite the prominent solo viola and wordless chorus, it is neither a concerto nor a choral work. The seamless viola line moves in unity with the orchestra and the chorus appears as a body of instruments, creating an effect of mesmerizing beauty and calm. The little-performed Suite for viola and small orchestra was written ten years later and contains some of the composer’s most lyrical inventions.

The lush orchestration and memorable themes in Sir John McEwen’s 1901 concerto expose this large-scale work as a neglected gem of the viola repertoire and Power’s performance is sure to set a new benchmark. The BBC National Orchestra of Wales, under the expert and unfailingly sensitive guidance of Martyn Brabbins, provides expert backing throughout.

[Power's] every phrase pulsates with an inner glow. He also captures unerringly the sense of mystery and veiled threat that haunts the unforgettable Flos Campi...The McEwen Concerto is a three-movement barnstormer in the Bruch tradition, which Power plays with a majestic virtuosity that fires on all cylinders.

Power's playing is wonderfully varied, at times delicate and poetical, at others broad, passionate and generous. This is especially so in the case of the two works by Vaughan Williams...This is a must-have for all lovers of Vaughan Williams and British music in general!

Lawrence is the perfect advocate for both [Vaughan Williams] works, with his rich, warm, sensuous tone and flamboyant virtuosity. His playing is just as persuasive in the Viola Concerto of the Scot John McEwan...This is easy-going late-Romantic music, with several nods to Brahms..the disc is unmissable for [Power's] immaculate VW

Lawrence Power, using an Italian viola made in 1610, plays with a tone as dark as a cello, and a technique as agile as a violinist's: the ideal combination. The largely neglected Scottish composer John Blackwood McEwen wrote his ambitious viola concerto in 1901 – a lyrical, almost Brahmsian work worth discovering...decidedly a favourite of 2011.

John McEwen’s Viola Concerto is a warm-hearted piece played with commitment by Power, while the two works by Vaughan Williams bring out the viola’s tender melancholy.

Power makes a strong case for [the Suite], investing in it playing of great power, focus and warmth...[Flos Campi] has not been better recorded than here.