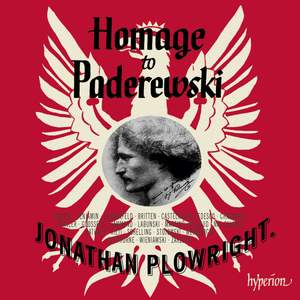 Though not all the works are memorable...this is a fascinating document...Overall more reflective than virtuosic, this disc allows Plowright to show off his superb command of texture and colour. — BBC Music Magazine, December 2011, 4 out of 5 stars More…

Following the resounding success of Jonathan Plowright’s 2010 Hommage à Chopin, the acclaimed British pianist becomes the first artist to record the album of works written and published in homage to one of the early twentieth century’s most fascinating figures, Polish pianist, composer and politician Ignacy Jan Paderewski.

Of the twenty-two works on this recording, from composers including Bartók, Martinu and Milhaud, seventeen were intended for the memorial piano album Homage to Paderewski published by Boosey & Hawkes in New York in 1942. A further six pieces written for the pianist also feature, including a Mazurka for two pianos by Britten, for which Plowright is joined by Aaron Shorr.

Plowright performs these diverse works with flair and dedication.

Though not all the works are memorable...this is a fascinating document...Overall more reflective than virtuosic, this disc allows Plowright to show off his superb command of texture and colour.

To be candid, not all the 24 items on offer on this disc are diamonds rather than paste...The genuine jewels include Ernest Schelling's sultry and ambitious Nocturne, a real find, and, better known, Britten's poignant Mazurka elegiaca...What is not forgettable are performances of a superlative technique and musicianship. Pianism and sheer musical quality of this order are rare at any time

Many of the composers have now disappeared into the mists of time, but all of these miniatures are well worth the warmth, affection, lyrical beauty and bravura that Plowright devotes to them...Plowright’s playing throughout is sublime.