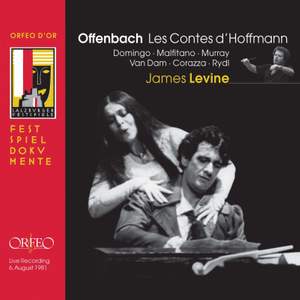 That the 'impossible' art form of opera may occasionally require the ordering hand of a strong directorial team was demonstrated by the Les contes d'Hoffmann on which Jean-Pierre Ponnelle and James Levine collaborated in the early 1980s, a production guaranteed to cast its bewitching spell on Salzburg audiences. The production opened in 1981 and is captured here in its 1982 revival, when its protagonist, Plácido Domingo, was at the very peak of his form.Appearing alongside him were two brilliant young female singers, Catherine Malfitano, who successfully faced up to the challenge of singing all three of Hoffmann's loves, and Ann Murray, who was ideally cast in the double role of Niklausse and Hoffmann's Muse, her solo numbers a notable feature of Fritz Oeser's new performing edition of the score and, as such, largely unfamiliar to the majority of the audience.With the mercurial José van Dam in the role of the four villains and with James Levine's unerring instinct for the theatre firing the Vienna Philharmonic in the pit, Offenbach's opéra fantastique was brought to vibrant life.